I’ve always followed the signs
and they’ve never led me wrong,
though the sign-post is often obscured
by scribbles and scrawls of teenage vandals.
I was assigned a placement at the office
after signing on, and there I signed forms, answered phones,
and told my boss she looked like the demon headmaster
(at which point I was forced to resign).

I thought I might re-train in maths
and have been practising my sine tan cos
but my sinuses are all blocked up
from trudging to the job centre in the rain.
So I’m having a day off.

The baby stuck my pencil up her nose;
this may be a sign that she’s going to be
a rocket scientist. Or so mother thinks,
but her sign is the fish so I doubt it.


Hello! This is 567ajt, here to review this poem.
I shall review one stanza at a time.

I’ve always followed the signs
and they’ve never led me wrong,
though the sign-post is often obscured
by scribbles and scrawls of teenage vandals.
I was assigned a placement at the office
after signing on, and there I signed forms, answered phones,
and told my boss she looked like the demon headmaster
(at which point I was forced to resign).

What I liked about this stanza is how you've described a dead end job. I also found the description of the sign-post as "obscured" by teenage vandals to be really fitting, and appropriate for the poem. The part in brackets about being forced to resign also gave me a little chuckle.

I thought I might re-train in maths
and have been practising my sine tan cos
but my sinuses are all blocked up
from trudging to the job centre in the rain.
So I’m having a day off.

I like how this character, out of that dead end job, is trying to do something ambitious like re-training in maths but can't because he/she is sick. It's quite fitting that going to a job centre makes the narrator sick and ill. It is quite symbolic of the toll that work takes on the individual.

The baby stuck my pencil up her nose;
this may be a sign that she’s going to be
a rocket scientist. Or so mother thinks,
but her sign is the fish so I doubt it.

Could be a flashback. Then again, she could be a single mother striving to find her daughter food after "resigning."

(I decided to check out some of your stuff, since you looked at mine).

Well, this certainly made me chuckle. I love all the sign mentions (or sine, or sinus, etc.). They really fit in smoothly.

There are a few things I would suggest changing (mostly adding commas).

after signing on and there I signed forms, answered phones

Perhaps it's just me, but I had to read this line twice because of all the signing going on. If there was a comma after "on", I think that this would be easier to read. Also, put a comma after phones because you're listing things. It also adds a bit of a pause before what seems like a bit of a shameful confession (though I may be reading it wrong).

(I love the parenthesis around "(at which point I was forced to resign)").

Perhaps you should start a new stanza after the line in parenthesis. The part above is quite focused on your (ex)job, and this part goes off on a tangent, much like the stanza about the baby (but not quite; you do mention a "job center" in this part, though I would still make it another stanza if I were you).

The baby stuck my pencil up her nose,
this may be a sign that she’s going to be

The second line isn't doing it for me. It feels a little clunky. Try "a sign, perhaps, that she'll one day be". Or, if you're going to keep it as it is, at least put a semi-colon after nose (my inner grammarian twitched when it saw this bit).

Insert a comma after thinks in the last stanza, and after fish. It'll create a nice little pause in there when people read it.

I hope that this review was a little bit helpful. I thoroughly enjoyed reading and reviewing this. It was lovely.

Rydia says...
Thank you magpie! I agreed with almost all of those changed and have edited accordingly. I think the only one I left out was the second comma after 'fish' in the final lines as I read that as quite a fast run-on.

Thank you very much!


Oh hello there Kitty. At least, I hope it's Kitty. I heard you switched places with Meshy. Gah. Confusing.

This poem made me laugh so hard. All the puns. This set of lines in particular:

I also really like the lines about the demon headmaster boss. They really nailed the quirky-semi-sarcastic-kind-of-sad-but-still-funny tone of the poem.

Now, and I am very happy to say this, I have only a couple of quibbles with this piece, which is always a wonderful thing to say~. The first one can be found in these lines:

though the sign-post is often obscured
by scribbles and signs of teenage vandals.

The "signs" in the second line feels a bit redundant considering you have "sign-post" in the previous line, and added with the fact they visually almost-line up, and it makes the repetition particularly obvious. I'd suggest using a different word, maybe "scrawls" or something similar, to kill that redundant-sounding repetition dead.

I get that the use of "sign" and its various forms/homophones in major element of this piece (and I thought it was particularly clever and cleverly done on a whole), but that particular case just strikes me as being too close and too obvious.

My other quibble was this line:

That baby stuck my pencil up her nose,

and it's not so much the line itself but how sudden the transition is between day off and baby shenanigans. I think it might be the use of "that" which makes the transition rockier than it could be. It reads like the baby isn't the narrator's baby, or even related to the narrator in any ways at all, really, which leads to wondering as to why "that baby" is even mentioned. If you could clear up the relationship between the narrator and the baby, I think it would smooth out the transition a lot.

But overall, I loved this poem, and it was a nice surprise to find in my review queue.

I love the title, the puns, the experiments with words - real clever and fun piece. I admit though, my first thought after reading it was how good this looks next to your avvie 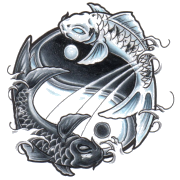 At some point it became a word search as I was trying to count just how many signs I could find (12- zomgnoway!sofun!), but I think most impressive is just how seamless and polish this is. It does lose a little punch with the 3rd/4th lines -- maybe there's too many, too densely packed -- but I feel like altering it in any shape or form would ruin it, so I'm torn.

from trudging to the job centre in the rain.

I would allude to this rain earlier in the piece, maybe just slip it in using as few words as possible, it can be something as simple as "I've always followed the dripping signs" - I dunno, your call. I think it would make neat reoccurring images, and it would keep that line from seeming to come out of nowhere/forced.

and looking at different pieces in the light and trying to prod and play with it and uncover more and more, it was a fun experience and I love you for it ^^ On the surface it's just all in all an ordinary day, but you still get this sense of uncertainty in the narrator, you get this sense of someone who may be lost and drifting and figuring things out, or someone who may be led by circumstance-- the rain is blocking my sinuses so I'm just gonna have the day off xDlolz-sounds like me! -- Am I too crazy to assume the narrator may be a pisces as well? Hm. The astrology aspect of the poem is all fun and games and obvious, but I think the title kind of alludes to a secondary part of it, signatures/identity crisis maybe? Maybe? ...Well, I could just be reading too much into it.

The ending is kind of...hilarious! Just crushing all of mother's hopes and dreams, eh?

It's been a pleasure reading this. I've prolly been less constructive and more silly in this review, but I s'pose that's just the Holidays pulling me along.

Don't accept your dog's admiration as conclusive evidence that you are wonderful.
— Ann Landers