SQ: More about the journey than the destination 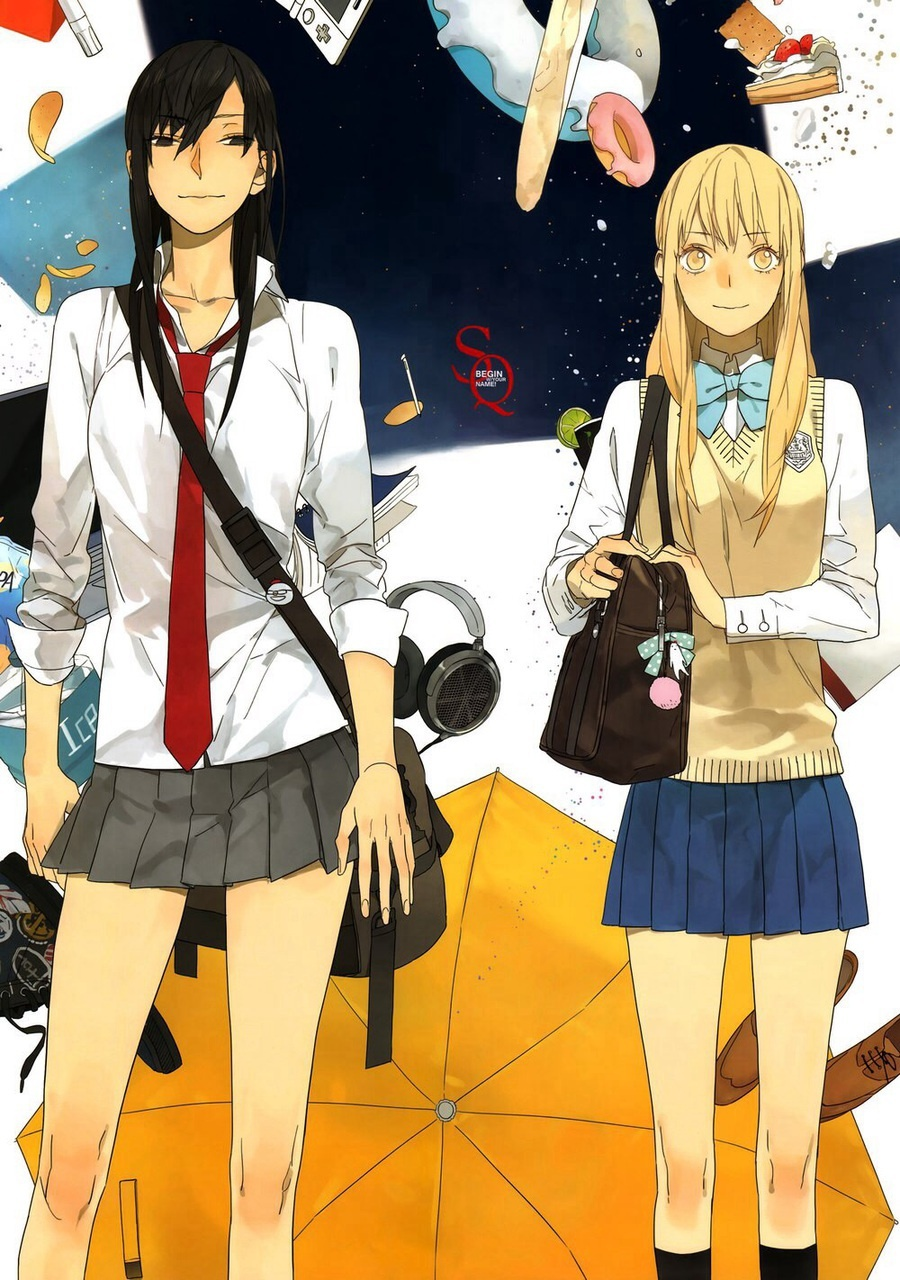 SQ: Begin W/ Your Name! (also known as 他们的故事) is a romance-comedy comic following the romantic life of the girls Sun Jing and Qiu Tong. Made by Chinese artist Tan Jiu and in serialization since 2016, it now stands at a binge-able 203 chapters.

The plot begins with Sun Jing walking outside a convenience store and bumping into a blonde girl she immediately finds cute. Seeing that their high schools are just nearby, she happens to see her all the time, finding herself more enamored by her every passing day. Eventually, she musters up the courage to befriend her—starting with knowing each other’s names.

And so begins the hilarious love story between the two. A lot of LGBT romance these days tend to highlight the perks and the pains of being in this particular group, often rousing feelings of pride and sympathy that give them a very loaded feel. But this comic doesn’t delve into that pathos. Heck, you might even forget that it’s a lesbian romance with how well it treats itself as just a standard, fun romance between two people—because in this area, it really excels.

The story mainly follows Sun Jing as she falls in love with Qiu Tong. But of course, the world isn’t just the two of them alone. In the process of them growing closer, side characters and events come into the picture, affecting their relationship. There are colorful personalities like Qi Fang (Sun Jing’s closest guy friend), their class representative (a dork nicknamed Tattletale), and Xuezhang (a hulking but friendly upperclassman whom Sun Jing competes with in a future basketball arc).

First things first: the art is gorgeous and versatile. It’s got this light, desaturated color palette with minimal shading that makes it easy on the eyes. It’s economical and cute, but it still feels really classy due to the clean lineart, great anatomy, and the characters’ charming designs. At its most intense, it becomes moving with moody city lighting, expressive facial expressions, and a strong command of the vertical webcomic format. The scenes where Sun Jing and Qiu Tong talk about their feelings towards each other are prime examples of the art’s prowess.

The comic follows the main plotline of Sun Jing and Qiu Tong’s relationship in chapters of varying lengths, and they’re often interspersed with short comic strips of the characters’ daily lives. These small tangents are either removed from the main story (i.e.the Xuezhang helping Sun Jing on a cold day), or are set in the main plotline but don’t affect the main plot at all (i.e. a chapter of Sun Jing and Qi Fang’s mischief before a major plot point). Either way, they’re really funny. 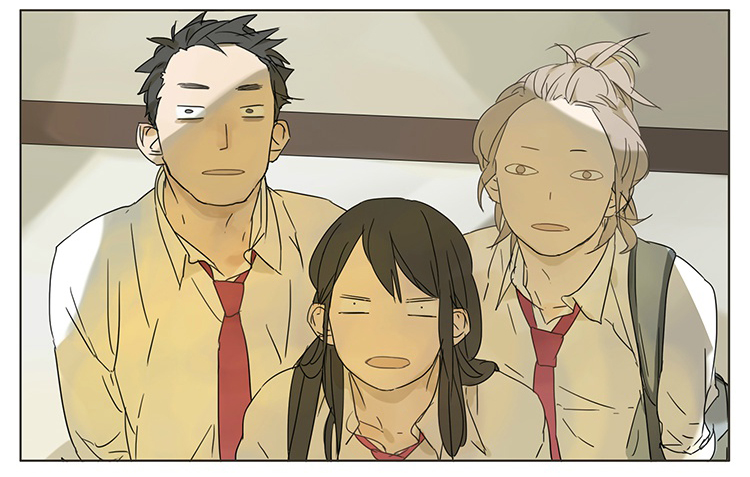 On a chapter-by-chapter basis, the comedy is consistently amusing. It takes the situations the characters are in on the main plotline—be it at a restaurant with a rival basketball team, or a hangout at Qiu Tong’s place—and it manages to set up punchlines around them. Rarely does the comic rely on cliche jokes, and never does it rely solely on cute art to carry the comedy. Really, there are a lot of original punchlines that feel like a breath of fresh air from the Western, Korean, or Japanese comedy we usually consume.

When the long-term writing is examined though, that’s when things get messy. Remember when I said the main story is interspersed with short tangential comic strips? Sometimes they do undermine the seriousness of the chapters prior and slow down the story’s progression. Oftentimes as well, the story seems to open up a new character arc (maybe Qi Fang starts to get some love as a character!?) but the author never explores that thread moving forward.

And here’s the biggest issue I have with the story. In the later chapters, a major (and I mean major) roadblock appears in the relationship between Qiu Tong and Sun Jing. I thought it was such a game-changer to how they would interact, and I was excited to see how Sun Jing was going to attempt to resolve it. But instead, the author seemed to forget about it ever existing, and moved forward as if this problem had been solved.

To me, this is a gigantic writing sin. But despite these narrative issues, I found myself still sticking to the story until its latest chapters. The characters aren’t deep, and admittedly the story does start to lose a bit of direction in the later half. But I realized that because of how much time I spent smiling at these characters’ antics and being invested in their conflicts, I became endeared to them as people. So endeared to them, in fact, that no matter what Qiu Tong and Sun Jing and company come up with next, I’d find myself willing to read it. They’re just charming people that are fun to be around, and that’s the joy of SQ.

SQ is in a limbo right now. The story’s progression has become sparse with months between updates, even on the Chinese sites. What’s more, it seems like the story’s far from over. SQ may very well never receive a proper ending at this rate.

But that’s okay with me. Really. Because even if there isn’t a definitive destination to this story, I am forever glad that, even if just for a while, I got to experience this fun journey with Qiu Tong and Sun Jing.

Recommended for webtoon, manga, lesbian, and slice-of-life story enthusiasts. Literally anyone can enjoy this story. Not recommended if you don’t like lesbian stories, if you want a heavier take on them, or if you want a complete, tightly-written narrative.

(To be published elsewhere. Photos just for context. No specific restrictions were set on me, but I tried to keep it below 1.75K words for the audience's ease of reading.)


Hello! Plume here, with a review!

I thought this was a really well written review!! I don't know much about the comic you're writing about, and I don't normally consume that type of media, but I might have to give it a try after what you've written. I do love lesbian romances.

I thought your essay and review was very structured and flowed nicely. It actually reminded me a lot of the way I write reviews here on YWS, and it worked really well in your case too! It's very effective to start by introducing it and then saying the good stuff before critiquing it slightly and then wrapping it all up. You've got a great introduction and conclusion, and I really like your authoritative writer's voice. It was a nice read, and the length was just perfect.

I really enjoyed your perspective on it as well. I think everyone has those sorts of stories that are just kinda fun to read, and not really that deep. For me, it's really bad YA romance novels that are super cheesy. A lot of the time, media that centers around romance is like that, but it's also pretty fun to read, so I could really relate to that part in your essay.

I don't really have much critiquing to do. Your grammar is pretty spot on, and essays are pretty standard. You've got a great piece here.

Overall: nice job! I'm not sure if this was meant to be persuasive or no, but you've definitely encouraged me to look into it more!

Kazumi says...
I got it bruv. Thanks for the review, and I'm glad you liked it. Maybe I'll make more hihihi


Hey there! I've never tried reviewing a review before, but I wanted to try my hand at this one. It wasn't until I clicked on it that I realized I had read a translated version of some of the episodes ages ago on Tumblr - so I just had to follow through with my plan to review this.

I wholeheartedly agree with everything you said about this comic. I don't remember how far I got or many of the smaller details of the story, but I remember it being a cute, lighthearted read. This part of your review in particular stood out to me:

And so begins the hilarious love story between the two. A lot of LGBT romance these days tend to highlight the perks and the pains of being in this particular group, often rousing feelings of pride and sympathy that give them a very loaded feel. But this comic doesn’t delve into that pathos. Heck, you might even forget that it’s a lesbian romance with how well it treats itself as just a standard, fun romance between two people—because in this area, it really excels.

I think I actually found out about SQ by someone else gushing about it on their blog for those reasons. It could handle some more serious topics, but queer lit usually has a focus on darker topics by default. It's really cool how SQ is so casual about its queerness. I also really like how you brought up that point early on in your review. It's a yuri comic so it's expected that you would mention the LGBTQ+ aspect of the comic sooner rather than later, but it was a great way to kick off the rest of the review.

I'm also a seriously big fan of how you interspersed the review with shots from the comic - and which shots you picked. The first one was a great way to introduce the readers to the comic's MCs (especially with that nice little caption down below) and the second scene really accented your point about the comic being fun.

I honestly can't come up with anything you could improve, but I really wanted to shout-out this one comment about SQ:

SQ is in a limbo right now. The story’s progression has become sparse with months between updates, even on the Chinese sites. What’s more, it seems like the story’s far from over. SQ may very well never receive a proper ending at this rate.

But that’s okay with me. Really. Because even if there isn’t a definitive destination to this story, I am forever glad that, even if just for a while, I got to experience this fun journey with Qiu Tong and Sun Jing.

As someone who stopped reading the story around chapter sixty-something, this part really resonated with me. It captured the essence of the story - and made a great nod to the title of your review. I hope this really does end up published somewhere else someday. You have a knack for summarizing the feelings of stories, and I'd love to see this in some kind of professional magazine/site!

I don't think you'll have any questions about my review, but let me know if you do.

Kazumi says...
Sixty-something? Bruv what in the world are you doing fricken drop everything and read it already! lmao

Anyway, it feels good to be back, and for my ego to be stroked by glowing accolades of my works. Please stroke my fragile sense of superiority more, thxgoodbye

I was kind of scared of adding the first block you quoted, because I didn't have hard statistics--I just had my personal experiences with LGBT media. But something about the comic's attitude resonated with me. It doesn't have to delve into the queer pathos all the time, because these characters are humans first before they are queer.

Thanks for the review. I haven't published anything in a while, so having people actually interact with my works instead of me keeping it to myself is really motivating me to write again.
Sign In