You know you’ve got a great boss when you’re singing Disney songs together. Painting the roses red, we’re painting the roses red! Ashley and I are in the back room of the flower shop, dipping and dropping various flowers in dye. It’s a routine morning chore, but I still get a laugh when people hear how the petals get their colour.

“Pardon me, Mister Three.” Nancy, the trainee, pokes her head through the door and interrupts our chorus. “But the dentist would like a purple and gold bunch, pick up in an hour.”

Ashley deposits the roses she’s holding in a vase of blue dye and hefts up a bottle of dark brown liquid.

“Here, Bella.” She deposits it on my counter. “You seem a bit uptight this morning. Working with some gold might help.” Uptight? I hadn’t even noticed. Maybe I was singing a little too deep, or emphasising my reds. The colour red wasn’t exactly on my favourites list at the moment.

“I am a little annoyed.” I push aside the orange dye I was working with and begin unfastening the bottle. Ashley raises her eyebrows in that do tell way. “My little sister got her period yesterday, and she’s been acting bitchy ever since.”

“She yelled for at least three minutes when I finished the milk at brekky.”

“Can you blame her?” Ashley laughs. “Milk is the bomb.”

I shrug, then take three white roses and snip a few slits in their stems. I place them in the bottle of gold dye- that’s how we colour our flowers, the rainbows aren’t a work of nature, funnily enough. Already I can see the stems turning brown as they suck up the liquid. When it gets to the petals, it’ll look amazing. Like pure gold, petals worthy of a queen’s crown.

“You weren’t too hard on her were you?” My boss pipes up after a moment of silence.

“I did storm out of the house without saying goodbye, but can you blame me?” I bend down and search through the cupboard under the counter for a bottle of purple dye. It’s hidden behind the red; dark and clotty, like blood. When I snap back up, Ashley is right in front of me with a fresh bundle of daisies in her arms.

“You ought to congratulate her,” she says.

“Excuse me?” It’s hardly a way to talk to my boss, but it comes out anyway. “For throwing a tantrum?”

“Your sister has just stepped into womanhood. It’s a frustrating, confusing world, and she has the right to be bitchy for five days in the month.” She thrusts the flowers at me -luckily I’ve got a tight grip on that purple dye- and smirks. “I bet she’s put up with a lot worse from you.”

I place the bottle of dye on the counter and cradle the daisies like a baby. I can remember when my sister was small enough to fit in my arms. Her skin was so soft and pale, and her little lips always curled up when I cooed at her.

I glance at the rose petals, swirls of gold rising in them like the morning sun. I can remember when my sister’s hair was gold and fuzzy. I’ve still got a ringlet of it somewhere, from her first haircut. She’d yelled and yelled at us to not ‘kill’ her ridiculously long hair, but afterward, she’d looked in a mirror and seen the beauty she’d become.

“Your sister is blossoming into a woman,” Ashley says, “and you’ve gotta be there to support her. Through the good and bad.”

You know you’ve got the best boss in the world when she tells you to drop your work and dye a bunch of flowers for your sister.

I dye those daisies every colour that’s available, a rainbow bouquet. Because even though we fight, that’s just a thing that comes with love. And my sister means everything to me. 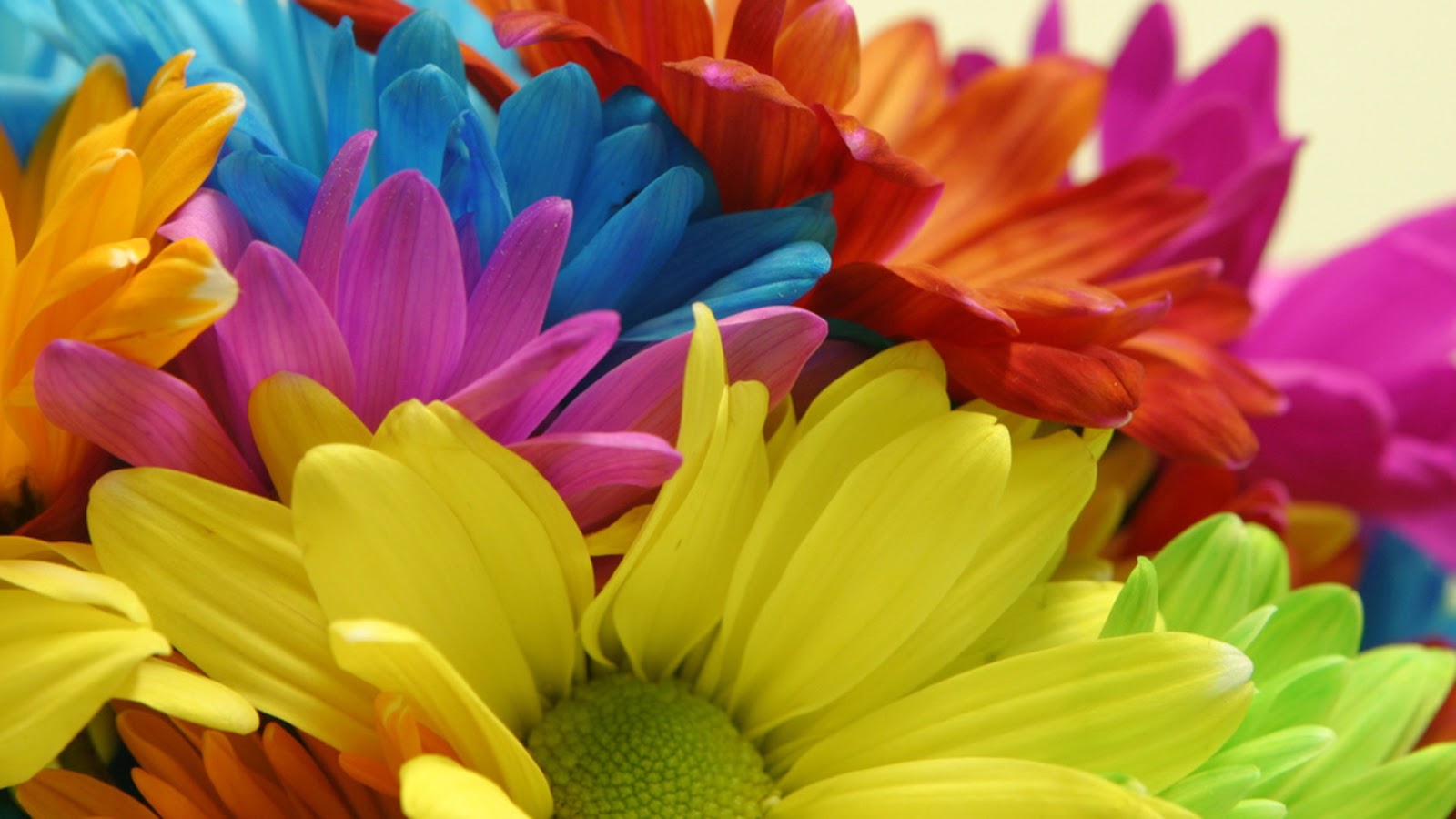 
Hey there Dracula. It's just lizzy dropping by real quick, so without a further ado, let the reviewing begin.

1. Sorry it took me a bit to get here, I was busy with exams for the past few months. The picture at the end threw me off a bit but I guess that was just to relate it back into the story, I didn't get much from it. It just seemed like a forced addition that you were putting there because you felt like people needed to know what dyed flowers looked like. If it holds some deeper meaning, please inform me of such.

2. The story took a twist that I didn't think it was going to take (which was a nice twist btw) and had a rather calm resolution. It just didn't seem like it was going to cool down that quickly, like there would have been more discussion between the main character and her boss. Maybe that's just how I loom at these matters but the light hinting of a tragic backstory, don't really catch my attention. Everyone has a somewhat tragic backstory that drove them to be here but I do get the feeling she's raising her sister by herself or something. That's about the only dark perspective that I'm getting out of this.

3. You might want to move the language rating up a little bit since you do use a form of 'bitch' twice. Even though I don't really mind it (and it's barely a swear word), rules are rules so. There was one particular line in this entire story that I just loved because it was just sitting in the middle of chaos and it was about peace itself.

This struck me hard because it just seemed like this one sentence was able to balance out all of the other crap going on in the story. Very powerful and very well done. And that's how the whole story was to me, a mixture of really vibrant but rare details, buffered by plain and filled with dread ones. Not going to complain about the balance because I like it.

Dracula says...
Thanks for the review! I'll bump up that rating right away.


Hi, Dracula.
I agree with other reviewers that it was very sweet. There can never be enough written on the subject of a big sister's love for her younger siblings. And I'm not saying that just because I'm a big sister myself. I liked how the main protagonist goes from being annoyed to reminiscing. I also liked her boss, Ashley. She has a way about her, makes me think of Felicity Dow, the main protagonist's boss in Madelyn Alt's 'Bewitching' series.
There are few typos, I think. You switch from past to present tense mid-story. « “Your sister has just stepped into womanhood. It’s a frustrating, confusing world, and she has the right to [be] bitchy for five days in the month.” » « I glimpse [I glance?] at the rose petals, swirls of gold rising in them like the morning sun. »
Kudos for one sentence I found hilarious : « The colour red wasn’t exactly on my favourites list at the moment. »

Dracula says...
Thanks for the review.


I think this is just sweet. The love of a sister. What else would fall into such categories of heart warming, heart rendering. And It was surely brilliant to express that the little girl was a flower. I love the way her mood changes from annoyed to a reminiscing stage. And I think that her boss is a brilliant character. Charming.

Dracula says...
Thanks for reviewing.


I just noticed that when I pasted this into the text editor, all my punctuation disappeared. Some words were in italics, and it changed the way sentences were read. I'll try to remember to fix it at some point. XD


This is so awesome! I love how you connected the flowers with the sisters period. She is blossoming into mother hood just like she see flowers blossom everyday! I have to ask if this is personal in any way or just something you came up with??

I didn't find many errors, I think you have a wonderful way with words and a very strong imagination. I love that it's a short story but I think it could of been a tad longer to add more detail about the fight. I also would have loved to known the sisters reaction when she got the flowers.

Great Job! Sorry I wasn't more critical I'm not very good when it comes to grammar and punctuation anyway ! Good luck with your writing career !

It's not personal, I just had a writing prompt which was a photo of rainbow flowers and this story evolved from that.
Sign In

Wild animals are just as confused as people are now.
— Jack Hanna