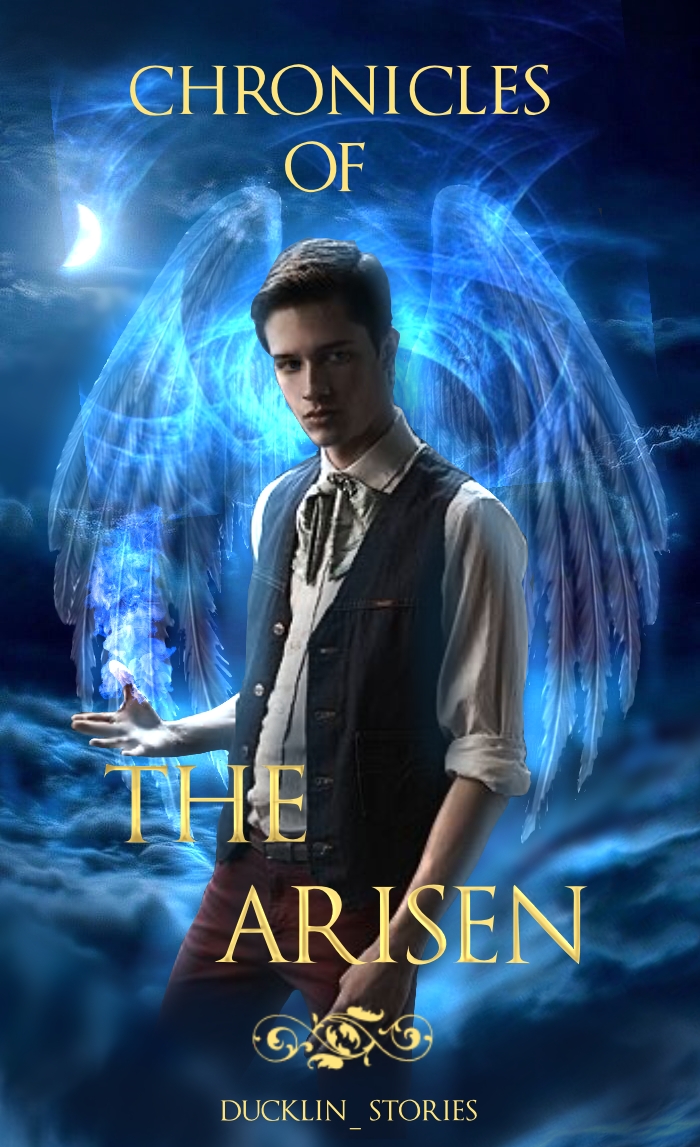 I quickly made a little cover as I do for every story of mine ;)

and for the curious ones among us, no it's not asmodeus on the cover

The dim light of the torches illuminated Asmodeus’ sharp face as the slumbering evening sun lit up the green plains of the Ferisal estate. After Count Ferisal, his father had beaten him, he felt ashamed. Not only because he succumbed to the count’s blows, but because Eris had to watch. Since childhood, Asmodeus protected Eris from the danger of the outside world. He had sworn that no one would ever hurt her as their father did. Asmodeus mouth twitched at that thought.

He didn’t look back at Eris after the spectacle and stormed out of the throne room as quickly as a whirlwind as if an invisible force was pushing him away. With a timid gait, he wandered through the corridors of the Ferisal manor, which had long since lost their period of glory. The once brilliant granite floor now radiated a dull glow. The rows of paintings on the chilly stone wall looked at him sternly, as if to warn him of his stupidity.

One painting in particular always caught his attention. As was his custom, he stopped, his hands folded together behind his back, his head turned slightly askew. The woman in the painting was certainly past 30, the small wrinkles of laughter around her thin mouth betrayed that. Her snow-white hair was half up, the free strands of hair writhing around her neck, like snakes looking for prey.

But what always struck Asmodeus were her eyes, the violet-like eyes seemed to burn on the canvas. They looked through skin straight into his soul. It adorned her tender neck, a chain of black steel that culminated in an arrow-shaped pendant of the same steel. The shame Asmodeus had felt earlier gave way to a warm feeling.

Asmodeus brought his hand to his neck where the same necklace hung around as in the painting. A gift from his mother.

Asmodeus’s throat went dry as he heard footsteps approaching. The Fresh smell of citrus and wood tickled his nose, that smell he recognized in thousands, Count Ferisal. The last person he wanted to run into at this moment. Desperately Asmodeus searched for a place to hide, Behind him, he could hear the steps coming closer. His eyes slid to the weapon chest covered by a purple cloth, the corners of his mouth lifted, forming a grin.

With a jerk, he pulled open the chest and stuffed his body like a sack of potatoes into the concise hiding place. Asmodeus had barely disappeared into the chest or he heard footsteps going around the corner. The bit of light that shone in through a hole in the oak chest made Asmodeus squeeze his violet-coloured eyes to slits. The rusty voice of his father echoed down the hallway, followed by a voice he did not recognize. Asmodeus pricked up his ears and could catch part of the conversation.

“You know the rules, sir.” begged the unfamiliar voice, almost. He heard a soft sigh as only his father could.

“I do indeed know them, but what good is it to kill him? The prophecy does not point directly to him,” The irritation could be heard in his father’s voice.

“In a way it does, You only have one son as far as we know. We can’t risk him thwarting everything.” Asmodeus held his breath. Were they talking about him? He had known for a long time that the Count did not like him, but to kill him, no. He wouldn’t dare. Asmodeus was his son. Any normal father would not even think of killing his son. Asmodeus had long realized, however, that the Count was not the normal father.

“So when did you think of getting rid of him?” the count asked curiously, Asmodeus could already picture him going through his grey hair, which the count always did when he wanted to know something.

Asmodeus struggled to breathe. This couldn’t be true. Is that why his father wanted him to look good so he could die in neat clothes like the proper son of a count. Asmodeus struggled not to jump out of the chest and strangle the count on the spot. But if he did, he might as well die on spot.

With clenched fists, he listened on.

“That’s settled then, get your men ready and tell them to wait for my signal” ordered the Count, the authoritarian tone was obvious in his voice.

After some murmuring, Asmodeus heard the two pairs of footsteps continue their journey until Asmodeus couldn't hear them anymore and silence returned like the waves returning on a beach. With a creak, the chest opened again and Asmodeus crawled out of his hiding place with a sore back. For the last 10 minutes he lay with his back on the scabbards of old swords, but he had worse worries on his mind than a sore back.

He had to get out of here with Eris.

Mailice here with a short review!

The chapter gave me a whole new insight into Asmodeus' character. Especially his nature has changed completely in my opinion, not like in the previous chapter, and after reading through it I'm now even to the point of feeling a bit sorry for him.

That's definitely a very exciting point that is mentioned at the end, which I also think is a super cliffhanger, for the next chapter.

You start with a very great introduction, where the reader gets right into it. That's a good point that should be maintained in the next chapters.

Her snow-white hair was half up, the free strands of hair writhing around her neck, like snakes looking for prey.

But what always struck Asmodeus were her eyes, the violet-like eyes seemed to burn on the canvas.

First of all, I think you've done a very good job of getting right to the point, and you've chosen this new paragraph to show the most striking feature of the portrait. I think that's very well done, and it also gives me reason to believe that the violet eyes are a special identifying mark of the family, after all, we later learn that Asmodeus has the same eye colour.

With a jerk, he pulled open the chest and stuffed his body like a sack of potatoes into the concise hiding place.

That's a very strange description, where I wonder how he got himself in like that, as I assume that the expression "stuffed his body like a sack of potatoes" means that he threw himself in (which presumably makes noise and hurts too?).

What leaves me with a few unanswered questions at the end (which is good, of course) is the question of why Eris has to come along too. I'm still missing a bit of a thought process as to how Asmodeus comes up with the idea of taking her with him, when it's really only about killing him personally.

As I said, I liked the chapter a lot and it was also very exciting. It gave me a new perspective on Asmodeus. I'm curious to see how the story will continue and to what extent Eris will play a role in the whole story.

Oh and I really like the cover too. I just don't know how much to interpret from it yet, if there is anything relevant to the story on it. But I do like the colours.

Have fun with the writing!


hi, just like the last one, this is an amazing chapter! it’s only the 2nd, but I can’t believe how much of an amazing job you did.

it shows him as a protective brother to Eris, although in the last one they had that fight. I like that, and again, they act like typical siblings.
his father is, again, abusive. reading that part of him saying he wants to get rid of him made me have mixed feelings.
I really do love this, and I hope you make another part. if you do, please don’t be rushed!
hope you have a good day

Ducklinstories says...
Heyy! Thank you again and again i%u2019m happy to hear you enjoyed it If u wan%u2019t I can keep u updated on new chapters?

All my life I've wanted to be someone; I guess I should have been more specific.
— Jane Wagner