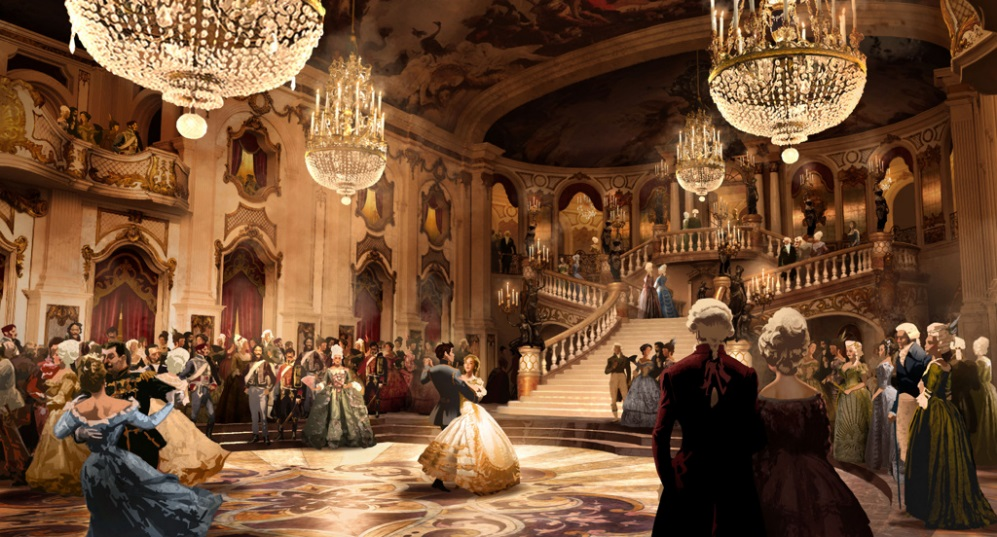 Welcome to the masquerade!! All for Show? I am excited, I hope you are too

Character Building
Okie so like I said in my intro post on the main thread, feel free to join and introduce your character in your first post with them (and here, of course!). You can play multiple characters if you like, as long as you differentiate who you are writing in each post!

Such charries include but are not limited to: the six other royal brothers & their wives, princesses of neighboring kingdoms, noblemen/nobility and their sons/daughters, musicians in the ballroom, royal guards or knights, etc.
- I'd also love to include a childhood best friend or two of the prince. (So one could be a potential female love interest he is deciding between. O.o)
- I was planning on roleplaying Queen Mathilde as well, but I don't have to if someone feels particularly called to that haha.

Atmosphere
I am imagining a ball-like setting in where my character, the enchanting Prince Theo, must choose his bride by its conclusion - much like the story of Cinderella. The time period/location/atmosphere reflects that movie too. Think a grand ballroom with a towering ceiling and extravagant chandeliers. A grand staircase leading into the ballroom. A great big table of savory dishes for elegant snacking. Drapes pulled to the side to let in the moonlight through floor-to-ceiling windows. A balcony with steps descending into an impressive, flowering garden. Lots of opportunities for interactions of romance, drama, fights, all the things.

Other Things
1) I don't really want the timeline to go too quickly, I would love to "savor" it, while still progressing the story. This masquerade is an all-nighter, haha. If you have any other ideas you feel we should include, post below! Be creative! And introduce those charries

I just ask that every character is...
- human, through and through (no special powers)
- using technology of the time (no phones, etc.)
- either one you already have or a new creation, as long as they fit the time/atmosphere, etc.

2) like the typical ball you might picture, there will be a royal "announcer"/bellman/master of ceremonies that announces each guest as they descend the main stairs down into the ballroom. He will be more of a "background character," and will also be used to progress the story along for certain parts. Because he is a background charrie, I'm going to say that you all can roleplay him as needed. For example, if your charrie is entering the masquerade, feel free to add in something frilly by him, like "the distinguished Prince Harold Wettin of Fyn!" That will help the story and then no one has to wait on someone to announce them. (Of course, this may not even be a thing for those sneaking in, unless they go by an alias or something!)

3) feel free to have your character interact with other random "background charries" too. I would like it to feel like there are a lot of people here, a lively party, with opportunity for much chitchat, dancing, grabbing food, and the like. Maybe even exploring the royal garden!

4) also if you could please post here on this thread your character bios, using the "spoiler" outline I have in the first post. That would be great! Then we can kinda get a better picture of everybody and I can make sure we have a reference list for them all in one place.

*don't feel like you've gotta memorize the brothers/wives lol, just want to have something differentiating them. Hoping to have at least some covered by users!
*if you are playing a brother don't feel like you have to play his wife if you don't want to, but may be helpful to be ready to insert an action or dialogue of hers here or there when it fits. For both, a super fancy bio is not needed, but enough to differentiate/any quirks you might want to add!
*if you have a name that speaks to you that's not one of the brothers/wives, lemme know and we can change it!

Bonus points if you made it this far and have read all of this mega post, hehe <3

I’d love to be a childhood friend, Jessica Clarke of the Bartons… not the Bartens… and be a maid hand who has snuck in secretly.
Swan Queen's little sister in-law/caretaker since 2022

@Moonglade Sounds great! Maybe the cooks could help sneak the maid in, maybe one of them could do her hair while another helps her get into a dress they managed to acquire by some means. I would love to stand in as a cook! (and by "cook" I guess I mean like some old ladies who she gets along with that work in the kitchen, lol) - what do you think?

Haha yeah - in my mind, she's not to the level of evil stepmother queen, but she's pretty strict and there's a "what she says goes" type of attitude.

That's brilliant tho! Yes yes - I wonder how long it'll take her majesty to notice... hehe

But she has to have something other than strictness to deal with 7 boys and choose their wives almost by hand and make them marry.

Hopefully I don’t nip anything too important.
Swan Queen's little sister in-law/caretaker since 2022

True...I'm thinking this now: she perhaps used to be a beloved queen, but since her husband died several years ago she's become more belligerent, strict, nasty, manipulative, even paranoid. Notoriously frightening when she's in one of her moods (but way deep down it stemmed from heartbreak).

I don't wanna totally take away all her motherliness but I agree she needs more depth so this^ may be a good reasoning? And adds more than just strictness.

I love the grief motive and hope maybe the prince will convince her that the sunrise is more beautiful when you smile and that the starlight is more bright when you are happy. (Me getting poetic ideas!)

I think maybe she’s like that… like nasty and harsh but when she calms down again she’s not bad she could just rephrase some things. (Like my grandmother.)
Swan Queen's little sister in-law/caretaker since 2022

Yes, as bright as a midnight star,

Sorta similar to my grandmother too. Thanks for the advice on her needing something a lil' more!

(Oh yes… the similie I have in my bank…)

Wether i join or not I'm def planning on reading this, mwehehe

I have an idea for a character that would require a decent amount of communication and such, so do pet me know if you're up for it, but I would like to create the royal tailor. He may be a friend of the prince or merely a very familiar aquaintence depending on how much time you have to talk about their past and establish things.

He would attend the ball in exquisite costume, not better than the prince's (the prince received his best work), but still impeccable, and be nearby in case of any wardrobe malfunction and simply be enjoying the party.

My initial thought on personality would be a very proper gentleman, professional and courteous at all times and awfully attentive to the needs and moods of the people around him. I may change my mind on this though as I workshop his backstory - which is, at the moment, absolutely blank - but that is my initial thought just to give you something to work with if you decide you want the prince and him to be friends of however many years, or if you think you'd rather have them be aquaintences on fairly neutral terms.

Just my initial thoughts for the minute.
formerly TheMulticoloredCyr

@TheMulticoloredCyr hey sure that sounds like it could add a lot of fun/interest to the roleplay! Love it. In my mind the prince and the tailor might not be best friends, but became friends in a more unusual way - as in perhaps the queen likes to propose these ridiculous ideas for outfits that are too gaudy or even just too much for what the prince likes, and the tailor totally gets it and tones it down at bit while also still giving impeccable work. This has happened over the years and since the king's death the queen has had more and more outlandish requests, but the prince knows he can trust the tailor and can count on him. I can definitely picture a humorous banter between the two, and maybe the tailor tends to have a piece of advice up his sleeve. What do you think?

*also adding a related detail about the queen here so I remember - she's become very concerned about image to the point where it's now overconcern and quite vain.
Last edited by clarevelyn13 on Fri May 27, 2022 7:39 pm, edited 1 time in total.

With that dynamic in mind, I believe that the two of them would have met when the first of the brothers were throwing similar gala's to find their brides, so the two would be very familiar.

With the advice angle I'm thinking the prince would be asking occasionally what he thought of the various princesses the tailor interracts with.


Also, for the RP as a whole, I think we should make up some short general character profiles for the brothers and their wives who aren't claimed by anyone to write so people can keep interactions with them fairly consistent throughout the RP. I'm thinking, like, a short paragraph about their personality, nothing too in-depth.
formerly TheMulticoloredCyr

@TheMulticoloredCyr I second that idea, short profiles for npcs would be really helpful, especially if we can have them all in the same place.

I just had an idea for a character, I might have other ideas later idk. Lemme know how u feel about it because I'm trying to design a character who kinda has 'side character energy', if u know what I mean. Like a side character in a Shakespeare rom com. Someone designed to make fun chaotic things happen for the romantic leads

So I'm picturing a drunk older brother to the prince who has good intentions but causes trouble by trying to set up these romantic schemes to help his little brother get a bride, but he's always misreading the moment or trying to set him up with someone he has poor chemistry with. Just a character we can use to cause some good ol mischief
Bad souls have born better sons, better souls born worse ones -St Vincent


What a piece of work is a man! How noble in reason, how infinite in faculty, in form and moving how express and admirable, in action how like an angel, in apprehension how like a god -- the beauty of the world, the paragon of animals!
— William Shakespeare