i know this with certainty, i will be the end of me
mortality grips
my throat; i will slice it off
before it chokes me
"Be the butthole" - Lareine, 2018

Don't forget to submit your poem tonight @LadyLizz! I'm going to get an early night so if it's a little late, don't worry too much.
Writing Gooder

@Rydia thanks for the reminder 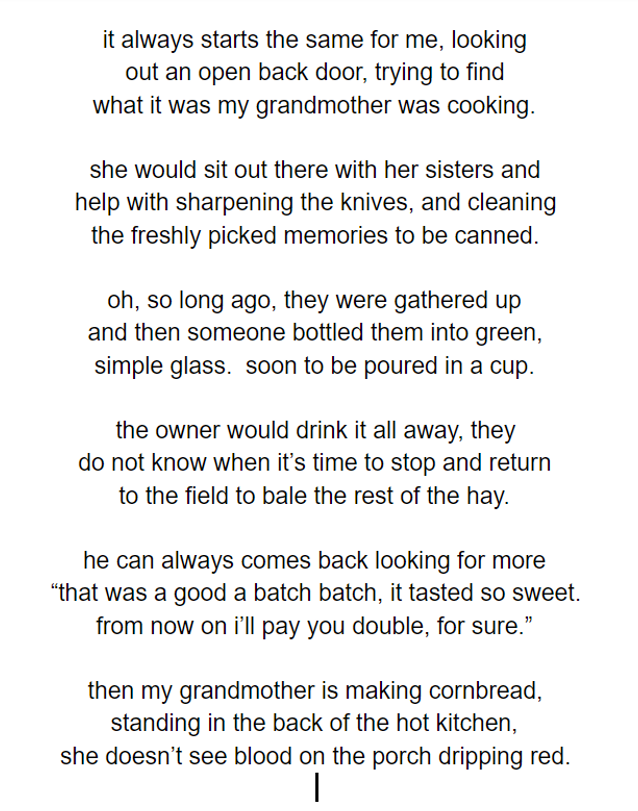 The results are now in and I can reveal who the last person to join our three wonderful semi finalists is...

That's right, @LadyLizz will be competing for the chance to be crowned YWS' best poet so it looks like we're down a judge for at least another round.

That's just four people left in now and we're approaching the final week of the contest. I haven't updated the chart yet but I'll post a link to it again when I have but for now let's have another look at who our final four are -

You have until 10:00pm GMT on the 24th April to submit your next poem. Remember, it can now be a poem written any time in April, rather than just the last few days. Ready, Steady, Poet!!
Writing Gooder

You have approximately 13.5 hours to submit your poem for the semi finals! At the moment whoever does is winning by default

Remember, you can use any poem written so far in April for this round!

who doesn't love a nice historical poem centered around one state with odd references?
no one that i know of.

the thoughts run smoothly, like the flowing suwannee river, next to an old plantation house.
the oak trees gather to form a canopy, far apart from whatever scene may be happening.
separately, cypress knees come up to haunt the shoreline, tripping hazards to
the troupe that will soon be marching through.

the songs of the days talk about kentucky or virginia or texas.
yet this place is sometimes ignored, for neither the union nor the rebels,
viewed it as anything but that place called a 'paradise'.

when ponce de leon landed on the shores with the men in the boats,
they looked towards the flowers for the name they would give this land.
ignoring the creatures that may have lurked in the water or woods,
seeing only the beauty that any beholder would be able to find.

it was praised first for the beauty of the landscape,
and second for the resources it might bring.
they had no thought for the others that may conquer,
though they would soon learn of these dangers,
as each new boat came into their harbor.

there was no expectation for the magnolia trees,
for the pecan pies laying in the kitchen window,
and the donkeys braying out somewhere in the lonesome farm yard.

no, for that singular moment of discovery,
there were very few thoughts about what this land was,
there was little recognition of what it may become.

only that they had found the land that may contain a path to eternal life.
the sword placed by the sailors, had claimed this front in the name,
la florida.
Cavalry Captain Jack
The Exploits of Lord Wolf
LMS V: How Do You Plead?
Get Your Reviews At Jack's Roadhouse
Jack: Live From Pensacola
Read All About It At The Lizard Lounge

Ehh might as well throw in one of my favorites.


When they tore down the house,
we (my sisters and brothers and I) found a pale white flower
nestled beneath now-broken floorboards;
we guessed it had been there for years,
kept alive by the steady dripping of water
from the leaky plumbing in the kitchen sink
that had doomed the house in the first place
(and so we suspected that the spirit of the house
had gone to the flower).

We dug it out, stuck it in a pot,
and passed it between us, so the flower would travel
to a new pair of hands every year
regardless of the distance between us,
and each one of us painted a circle on a petal of the flower
out of his or her favorite color.

We were young, but even we knew
that it would have to die eventually.
But when, despite the many times
someone forgot to give it water or food,
it survived and kept its faint white glow
in the nighttime, we were elated -
it was our nightlight, our green and white thread,
our birthday gift and present.

It saw hats tossed into the air,
stethoscopes lining the walls,
the inside of airplane cargo holds,
white-capped mountains spewing smoke,
newborns placed in their tiny cribs,
nursing homes littered with wheelchairs,
and rested atop funeral casket after funeral casket.

It only watches over me now.
I see their names and faces in each of the circles,
and halos sprout from the flower's faint glow.
It catches my tears and shakes gently in the breeze.
Perhaps it's taken their souls too;
perhaps they're all in the house now, in their rooms,
waiting for the final pair of soft footprints
to climb up the stairs, open the doors,
and give an embrace to last
for the rest of time.

I'll go with this one!
'Tis the season! Donate your poetry.

oh i am so dead
Cavalry Captain Jack
The Exploits of Lord Wolf
LMS V: How Do You Plead?
Get Your Reviews At Jack's Roadhouse
Jack: Live From Pensacola
Read All About It At The Lizard Lounge

Here's my entry. Good luck to the three other remaining participants!

These are the names we call ourselves
when the wanderlust from when we were kids
lingers behind and inhabits igneous bodies.
Blood vessels erupt as magma swells
from the volcanoes burgeoning on your skin.

These are the names we call ourselves
when the wanderlust from when we were kids
waves a lighter in front of us, creating glints
of naivety in our mesmerized eyes.
The flame flickers from side to side
acting as a pendulum to the oblivious.

There's a difference between watching an inferno
and nurturing one; that's why adults say
'kids, do not try this at home'.
Kayla, Knight of the Green Room
Will Review For Food - Always taking review requests!
Discuss the last piece of media you consumed in Media Reviews!

Apologies for the delay everyone! But I actually don't have enough votes in to confidently call this round yet so I'm actually going to ask all four of our semi finalists to please submit a poem for the final before the end of the month!

I am also going to ping my wonderful judges and ask them to help me judge this round!

IM SO SORRY I KEEP FORGETTING ;-;

I WILL VOTE LATER, IM SETTING A REMINDER NOW!!!
“I can't go back to yesterday because I was a different person then."
- Lewis Carroll

I've put my votes in for the two poems I'm able to vote on since I'm a competitor in the other round!

I'll have a poem here by the end of the day, too. I'd love to see the other judges weigh in if and when those people have the time. <3

Good luck to the other three remaining once again!
Kayla, Knight of the Green Room
Will Review For Food - Always taking review requests!
Discuss the last piece of media you consumed in Media Reviews!

Thanks Kaylaa! Sorry I got the greying out messed up, I was half asleep when I realised I had't done it xD

We'll definitely give scores for the runner up poems as well, it doesn't take much longer to grade four than it does to grade two


Make your dreams come true. Don't wish for them, work for them.
— Lilly Singh