Welp, you've found yourself here, of all places.

Why are you here? Who knows. But, one thing's for sure. You can't leave until the three hours are up, no matter how much you might want to. So, you're stuck in here, with four other people. Instead of doing what you need to do, like homework (wait... do you even do homework??), you decide to do what all detention-goers end up doing in the movies: chatting.

Railyn sighed and found a pencil in the compartment under the desk (along with a looot of gum) and started tapping it on the desk.

He stared at the clock. No time had passed.

This was gonna be a long detention.


Spoiler! :
Name: Aamokan "Amoku"
Age: hmmmm he's had mANY different ages hehe uh let's go with NINETEEN THEN OKAY
Gender/Pronouns: Male, he/him
Appearance: Slim and tall stature with a heavy asian look and short black hair that's usually messy, but too short to be a huge problem. He only wears red, and often goes barefoot because of his hatred of shoes.
Personality: Terrible personality, but that depends on your definition of 'terrible personality'. He's salty, sarcastic, and mean to the point where it's not that mean, but just annoying. He's a stubborn hothead, and enjoys seeing people squirm. However, despite his flaws, Amoku can be selfless and courageous sometimes, revealing a nearly altruistic honor, which he finds is the most important aspect of any person.

The guy tapping on a desk was starting to get on Amoku's nerves. Amoku enjoyed 'silent power', where he exercised control over a situations without saying a word, but this blasted tapping was going to be the end of him.

Amoku began to fantasize about ways to violently conclude the tapping.

He began to shake, preparing to release his fury.

"Stop it with the tapping!" screamed Amoku.
certified weirdo

Railyn jumped and glanced over at the guy with the red shirt and messy black hair. "Uh, sorry, just... well, nervous. I've never been in detention before..."

He resisted the utterly huge urge to tap the pen again. Instead, he started tapping his foot. It only slightly brushed against the bottom of the desk. Surely that wasn't too distracting, right?

"Is it even possible for you to sit in silence? Learn to embrace the nature of stillness!" Amoku growls, and slumps back in the chair with his eyes closed defiantly.
certified weirdo


Spoiler! :
me too lazy to figure out what million rp versions of elias i want to play (canon elias is too complicated past 16 tbh) so i'm throwing a modern day elias into this partly also bc ive already filled out a cp for him there and im too lazy to make a new one LOL 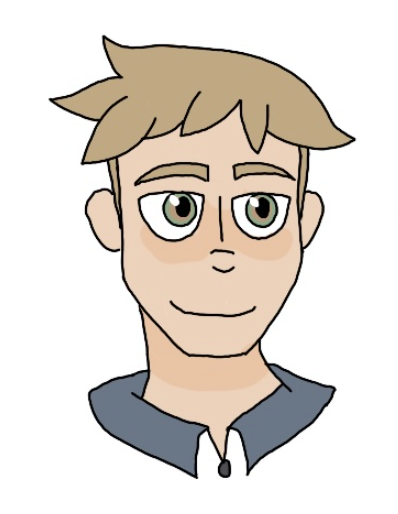 Personality: Complete goof! He's a live-in-the-moment kind of guy and would much rather spend his time with people and activities than doing boring school work. He's super extraverted and can make friends with anyone, although he follows a chaotic structure and can be fairly unpredictable. Elias thrives on adventure and new experiences, and is a bit of a daredevil and wouldn't care if the activity he did was risky (i.e. rock climb without gear). He's deeply empathetic towards his friends and wouldn't want to put them in danger or uncomfortable situations, though. Just wants to make them laugh and smile! Overall, he lives in his own naive bubble of "this is fine, nothing can go wrong," and will seldom be negative.

Other: After graduating, he's thinking about going to a cheap public university to major in nursing, but hasn't committed to anything yet, especially since his grades aren't that great. His ideal job would be working as a nurse in a children's hospital. His older sister is going through her doctorate to be a surgeon, which he so deeply admires, but he's like, "lol nah I don't wanna go through that much school, nurse it is"

Elias awoke with a jolt from his nap on his desk, snorting and shaking his head through his bleary sleepy eyes. "Uhghgsugh... did you guys hear that?" he asked while frantically looking around with half-lidded eyes, wearily rubbing his face. His gaze landed on some dude with sick dragon tatts, eagerly tapping his foot.

"Oh, my bad. Thought there was an earthquake," Elias said with a yawn, then placed his head down to sleep again, ignoring the small puddle of drool on his desk.
chaotic lazy
—Omni

the queen of memes
—InuYosha

Railyn glanced around, stopping his nervous leg shaking. "Well, I don't know what else to do, or, like, what I'm supposed to do. What... are we supposed to do?" He pointed over at the guy snoring. "I don't think it's that."
This account proudly supports lgbtq* rights.
sass levels loading

Still with his head down, Elias lifted his arm and twirled his hand in the air. "Sleep," he said with a muffled voice since he was talking with his face against the desk.
chaotic lazy
—Omni

the queen of memes
—InuYosha

"Well, what a better chance to introduce ourselves than while another is snoring like a congested pig?" said Amoku, "My name is Amoku."
certified weirdo

Audrey sighed. "God, would you three shut it? I'm trying to do my nails." Her otherwise perfect french tip was smudged by her quivering hand. She knew she could get away with most anything, so she wasn't worried about the repercussions. She flipped her auburn hair with her free hand and gave Amoku a withering glare. "What would you goody-two-shoes have even done to land yourselves in the dungeon with Mr. Flaherty?" she scoffed. "I was caught smoking pot in the girls bathroom with Andrea. Beat that," said Audrey. Secretly she was a little ashamed of being in detention for the second time this week, but she tried not to let it show.
ok byeee[color=#FF8080][/color]

Leo slumped further into her seat. Trying to stay as silent as possible was hard because there were so many things she wanted to say: to herself that was. There were four others enduring this torture along with her. She just didn't want to tell everyone what she was in for; not under all of their scrutinizing stares and nasty comments.


Life is the art of drawing sufficient conclusions from insufficient premises.
— Samuel Butler