So the whole shtick of this thread was supposed to be that I'd play a video game for at least an hour, then write a partial review on the chunk that I had experienced, which is much more fun and attainable for me than to play through the entire game and then try to encapsulate it into anything coherent.

That said, and while still fully intending to go through with those sorts of shorter reviews in the future, I'm gonna start this thread off with a game I actually (surprisingly?) finished already! It only took about four hours, according to Steam, which is more than this thread is gonna ask for but also a lot less time than I was expecting it to take? And honestly, if I hadn't kept getting lost and backtracking and getting distracted, it probably would've been done with much faster.

I guess the basics I'll wanna cover in most of these "reviews" would be as follows, in no particular order:

- Gameplay
- Controls
- Graphics
- Music/Voice Acting, if applicable and worth mentioning
- World... stuff? - and
- Was it fun?

Of course there may be other points I'm missing and will touch on; this list isn't a complete or concrete metric to follow, nor will I touch on each aspect for every game? It's more just a flimsy scaffold to try and build off of and to reference when necessary.

I'll also say right now that this will be Mostly Incoherent Babbling and probably not much fun to read, but it's here if anyone is interested? Oh, and obviously, minor spoilers.

Anyway! On to blathering about the game.

The game started out with text-based scenarios, and multiple-choice options to choose in response to these scenarios. At first, I was worried the game would be nothing like I was expecting, but then I realized that these opening scenarios somewhat set the pace for a few details that crop up later in the game. Nothing super drastic, at least in my playthrough? But I've been playing alongside a friend and it's been neat to see how little interactions vary between our games as we make different decisions.

That's quite a chunk already.

Then you're finally in the game! 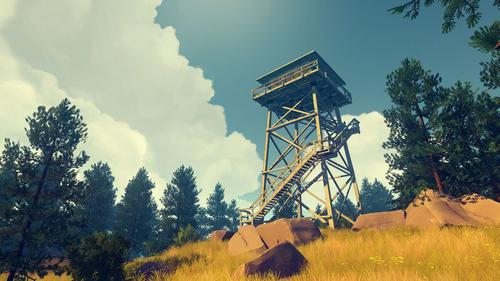 I'm just gonna gloss over the controls and whatnot so that I can leap into talking about the voice acting, because oh man the voices in this game are superb.

Honestly, not only are the voices for each of the (few) characters great and fitting and excellently performed, but the dialogue and character interactions themselves are just fantastic. You really only talk to one person throughout the game (though there's a part where you have a brief call with another, but it's unclear to me whether that was real or a dream or whatnot, based on later dialogue), but the interactions are still really great.
The quips and banter and dialogue are fun and believable, and the familiarity between the two characters grows naturally over the course of the game. Some moments are rather endearing? Like, if you play your cards right, you can grow a friendship between them and it's really nice to listen to. (Of course you can also be cold, but I Can't Be Mean In Video Games, so I don't know how that turns out in the end.)

The time limit on actually responding was... Realistic, I suppose? But a few times it sort of stressed me out because I was either still processing what had been said while trying to read through my response options and the time would go out and the person would get annoyed, or I'd accidentally select a response I didn't want to go with because I wanted to get it in before time ran out and fumbled it and--

That's honestly more on me than the game, but YEAH. Time limit. Serves for more immersive conversation, I suppose. 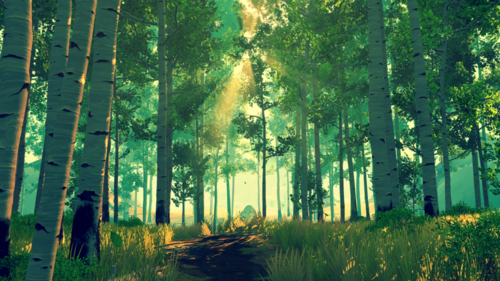 I actually grew pretty invested in the characters' relationship, and each interaction felt important. I'd restart sometimes to check out other possible paths, but a few of my restarts were also just to mend a mistake I made in interactions that had lead to a character being upset or that had caused unnecessary tension?
I dunno, I really liked the characters and I wish I had more time with them.

The graphics in this game were nice, as seen in the screenshots I've sprinkled through this post to keep it from looking to bland. They weren't anything spectacular or stunning? A few portions looked kind of repetitive, but hey, the game has you hiking around a forest and canyons, so you're bound to see a lot of the same (i.e. trees). That said, there were a few locations that looked really nice, and even with all the hiking, the world never felt... empty? 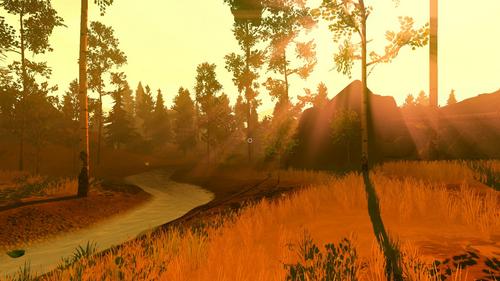 Like I said at the beginning, I managed to zoom through the game in 4 hours, and could probably have done so in less. But I think I probably didn't focus as much on exploring the world and checking out as many little details as I could, to be honest. I mean, I did scan over practically every little thing I could interact with whenever I happened to find such things. I even searched through my lookout tower at the start of every day to see if anything had changed or become interactive in some new way.

I chucked loose rocks, I got stung by a bee, I rolled a d20 (couldn't read it 'cause it fell under my desk), I put on my hat every morning (a must in my virtual routine), I picked up random cinderblocks, I tossed a baseball in an outhouse toilet. I did a lot of these random small things (because there's a decent amount of interactivity with the world's items?) but I still feel like I missed a lot of details.

There's apparently raccoons, and there's an achievement for adopting a turtle that I didn't even come close to (NEVER FOUND TURTLES? GOTTA PLAY AGAIN FOR TURTLES), so yeah, I don't think I fully experienced the game.

That said, though, I did still enjoy the story, and it was a good time. I'm rambling a lot more than I meant to when I started this so I'm trying to wind it down now, I swear!

The story was intriguing, mystery swelled, there was a lot of suspense. I don't really remember much in the way of music, but I do recall some adding to the feeling of suspense and urgency whenever a new twist came up or you discovered something about [INSERT PLOT POINT HERE], so there's that. 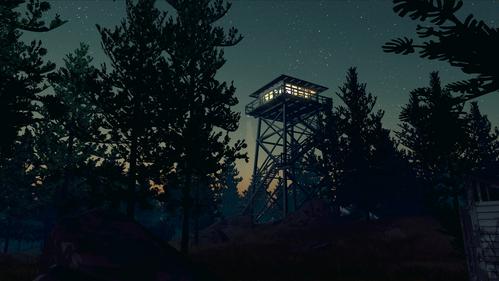 My main qualm with the game is that the ending was pretty darn anti-climactic. Especially after all the suspense around the mystery and building up my attachment to the characters. I didn't really like how I played out some of the final interactions either, but the gameplay leading up to that was too much for me to restart and go through again (personally) just to maybe pick a better response.

I feel like this "review" hasn't been entirely coherent, or had much of a goal. I wanted to try a number system for rating games in this thread, similarly to how I do with movies on my wall, but those don't have any real metric, and I can't really think of what to grade Firewatch.
It was captivating in a way. The story had some holes and could probably have been better, but it kept me intrigued and wanting to get to the bottom of things. The characters were great and both their dialogue and voices were spot-on. The hiking got a bit dull at times, especially when I kept getting lost and having to backtrack through the same scenery over and over, but it wasn't horrible.

Good game, I enjoyed it!

Spoiler! :
I apologize for just how LONG this post turned out to be, and the poor placement of any images-- it's late and I'd probably do well to save this for later proofreading, but if I leave something for proofreading I'll probably never get to it and I'd rather post this and try to start doing stuff than let it gather dust until I forget about it. Anyway, if you made it this far, thanks for reading!
"I remember I posted Klingon and it made the mods super hard" -Willard

please bring this back
"Words say little to the mind compared to space thundering with images and crammed with sounds."

how dare u revive this

what should i play ?
"I remember I posted Klingon and it made the mods super hard" -Willard


Just because you don't feel like a hero in your own story, doesn't mean you're not a hero in someone else's.
— Tenyo