Overview:
In the early 1820s, Europe falls into an economic depression that causes several European states to collapse and capitulate to the nations of France, Austria-Hungary, Prussia, Britain, and Holland (the Netherlands)

The American Civil War begins in 1856 with the election of John C. Frémont as the 15th President of the United States. The Southern states successfully won their independence with John Tyler as their first president.

England is forced to negotiate a new treaty with New Albany (formerly United States) and loses Canada in the 1860s. However, England takes France, Portugal, and Iceland by naval warfare and economic sanctions.

In the 1870s, Indian and Chinese militia groups organized and overthrew colonial British rule. Queen Victoria turned her eyes upon South America and Africa, ordering invasions of Brazil and Morocco.

Throughout the 1880s and 1890s, wars, economics, politics, and other factors led to the rise of steam becoming the ultimate source of power. In 1894, Britannia (formerly Britain/England) successfully built the first airship in their Brazilian territories. Meanwhile, South American countries united into the Incan Empire and began colonizing parts of Africa. Now, the world looks like this: 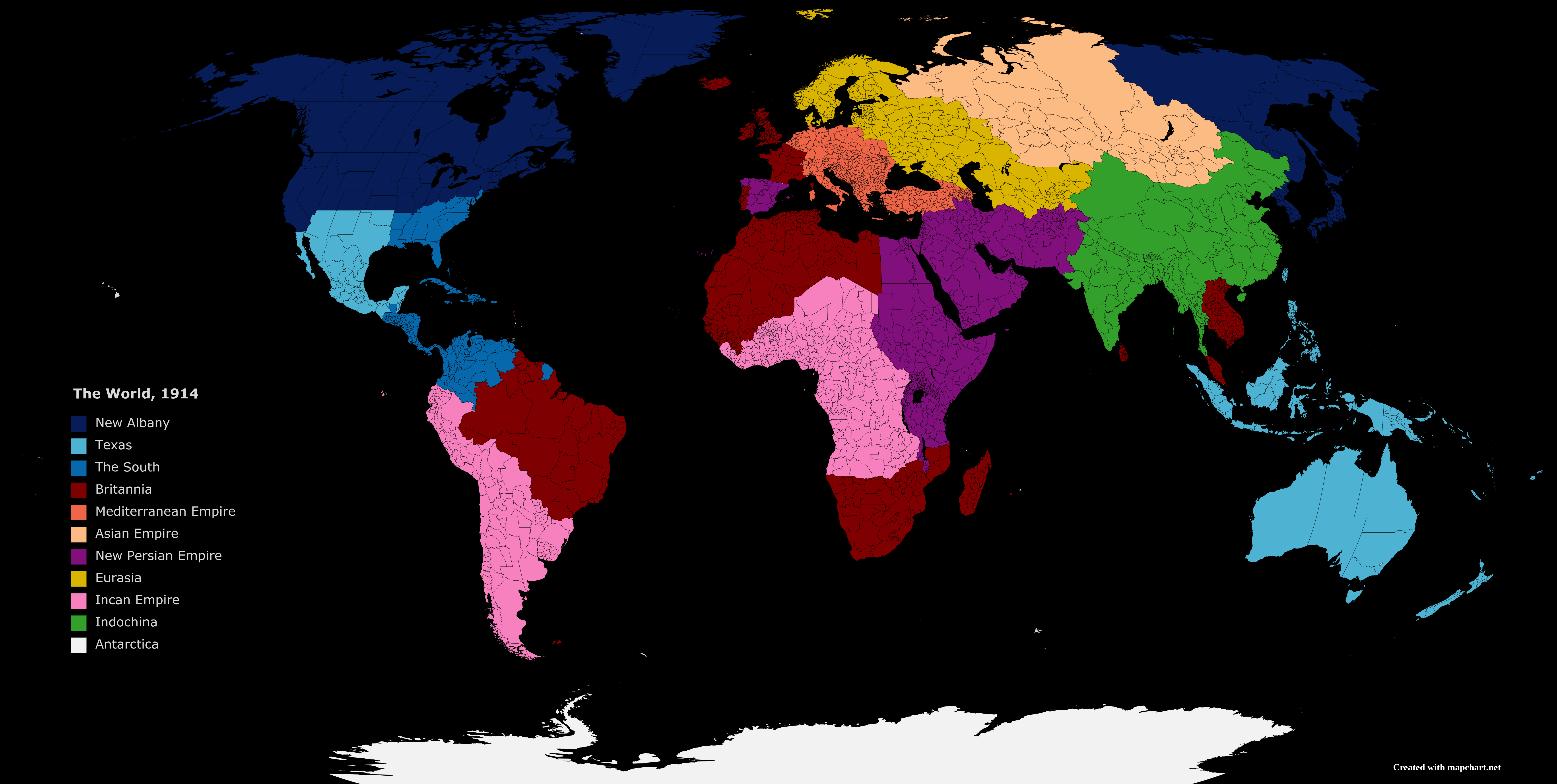 Each of the 10 nations have their own advantages and disadvantages, the strongest being Texas, the South, and Britannia, and the weakest being the Asian Empire, Eurasian, and Indochina.

I'm thinking that I'll elaborate a little more on the world's alternate history before going on through the strengths and weaknesses. Then, I'll do some population, military, etc estimates and so on, but I'll leave the government and politics open to whoever chooses that nation to rule. I'm still trying to find some plot ideas, but I think that this is (hopefully) a good start! c:
Last edited by TheScribe on Thu Jan 21, 2021 3:57 am, edited 1 time in total.
[We are a System. We were formerly @Vil. Honorine (she/her), Carolina (she/her), and I (VP/Vilnius, he/him) will be fronting.]

This looks fun but I just have a quick question, when did Australia fall to Texas? It just seems a little strange.

@QuoolQuo I was thinking that I'd take some liberties with what does and doesn't make sense, so I ad the idea that Britannia was struggling to defend Australia and sold it to Texas as it as a close neighbor in the Pacific.

[We are a System. We were formerly @Vil. Honorine (she/her), Carolina (she/her), and I (VP/Vilnius, he/him) will be fronting.]

Ah, that sounds alright, and since this is an alternative history anything could happen.

I don't have any critiques for this, but I love how you took things that were happening at right around the same time and played with them to make an unique alternate history! You already have a knack for doing that with modern politics, too, but it was really cool seeing how you approached a more historical political scene.
[ mage ]

Creator of Extraterrestrial: The Podcast

The Life of An American Teenager

Thank you @Magebird!
[We are a System. We were formerly @Vil. Honorine (she/her), Carolina (she/her), and I (VP/Vilnius, he/him) will be fronting.]

Here's some more history that I've written up! ^^

1820s:
The French economy plummets and civil war erupts nationwide, resulting in mass panic across Europe. Napoleon takes control of the French army and his daughter marries into the English royal family, resulting in the French and British Empires solidifying into one international empire.

Prussia unites the Germanic states and begins an invasion of Russia, taking large amounts of land before moving into Italy. Prussian King Frederick IV continued his father's policies of taking care of the lower classes and renamed his kingdom the Mediterranean Empire.

In Asia and Africa, the Ottoman Empire lost vast amounts of land due to localized droughts, famine, and rebellions. Much of its northern territory is lost to the Mediterranean Empire, so the Ottomans turned their attention southward, capturing large swathes of Persian territory. As such, Mehmed VI renamed his kingdom the New Persian Empire.

The Vanderbilt family invested in steamships and railways, slowly building a coastal fleet and shipping system. Henry Bessemer and William Kelly worked together to create a large-scale steel production system, the Kelly-Bessemer Process, and began building steel plants across the Midwest.
[We are a System. We were formerly @Vil. Honorine (she/her), Carolina (she/her), and I (VP/Vilnius, he/him) will be fronting.]

Bro I LOVE alt history things like this that clearly have a lot of love, knowledge and thought put into em

Thanks, @SirenCymbaline! You can have Prussia s long as I can have the South lol
[We are a System. We were formerly @Vil. Honorine (she/her), Carolina (she/her), and I (VP/Vilnius, he/him) will be fronting.]

I made nation sheets!

Following economic disasters and global wars, the Earth of 1914 is very different than it was a century ago. Steam power has taken control, and the globe is changing faster than ever. Everyone wants to get rich quick as best they can, and the richer they get, the better it is for them. Your characters are world leaders, politicians, investors, or inventors looking to take advantage of the "steam revolution" to see what heights (literally and figuratively) you can reach before you fall. Some are talking about blimps, others improved trains and ships, and others still space exploration-- the possibilities are endless! The 1914 World Fair in Houston, Texas will display many of the new wonders, including the first ever steam-powered vehicle that uses water and charcoal briquettes. Everyone who is anyone (or no one at all) will be there.
[We are a System. We were formerly @Vil. Honorine (she/her), Carolina (she/her), and I (VP/Vilnius, he/him) will be fronting.]

i haven't followed up on all the information discussed in the DT, but this RP is a pretty good idea. i mean, i would definitely join this RP if you made it one
When life brings you down, don't care at all, because the last thing you want is life being smug over it's victory against you.

Thanks for the response @Yoshikrab! I'll tag you if/when I post it! c:
[We are a System. We were formerly @Vil. Honorine (she/her), Carolina (she/her), and I (VP/Vilnius, he/him) will be fronting.]


I wouldn't think "impossible" was even in your vocabulary.
— Sharpay Evans, High School Musical