Classes started up for me just recently so I've been swamped, but I absolutely encourage other folks with knowledge to contribute to the thread. I'd love for this to become a conversation.

I'll get back here when I can, but a side note: the correct plural for octopus is octopuses or octopodes. The root of the word is Greek, not Latin, so while octopi is a common usage it's technically incorrect.

I miss answering this thread.

Captive octopuses must be kept busy or else they'll literally die of boredom. That's why zoos, aquariums, and pet owners must enrich them constantly with puzzles, training, and toys. These are some of my favorites. 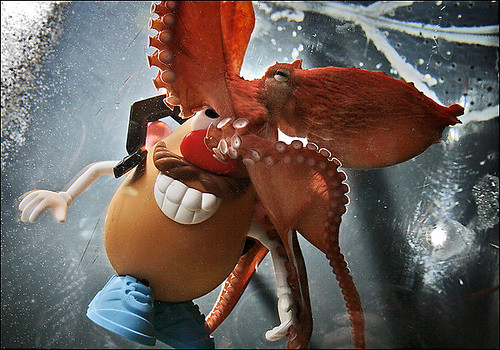 I LOVE EVERYTHING ABOUT THAT POST. And today I learned that an octopus is smart enough to put together a Mr. Potato Head.

Also, a very late thanks to @FalconerGal9086 and @Kyllorac for sharing your stories and answering my question. <3
"Anything you write anywhere on any domain is automatically marked as spam by the internet overlords."—Veeren
"OMG"—AstralHunter
"Are you just gonna keep adding quotes in your signature?"—Omnom
"add dis quote"—Iggy

I'm trying to edit my novel focused on wolves, so what can you tell me about pack structure? I know that there's an alpha pair and an omega but I want a lot of details. Sorry if that's a lot to ask for, I just have a lot of inconsistency and need to sort it out somehow.
Believe that life is worth living and your belief will help create the fact.
— William James

I'm going to keep this post pretty short since I'm tired, but the average concept of alpha/beta/omega is entirely inaccurate and needs to be thrown out (at least in its present publically-known iteration). Skip to below the wolf picture if you just want to know the truth.

In 1947 a guy named Rudolph Schenkel set out to learn more about wolves.

There's not a lot we know about him now, but he's an important dude in the world of animal behavior. Schenkel was the one to present to us how most people understand wolf packs and even dog families to work today: you have the alphas who eat first and are in charge, and the submissive betas who have to grovel and constantly reassure their dominant counterparts they are, in fact, supreme.

The problem was that instead of studying wolves in the wild, he took a bunch of wolves who were complete strangers, put them in a pen together, and watched the chemistry happen.

The good that came from it: he was the first to document in detail canine expressions and body language.

The bad: he saw the extreme aggression and constant in-fighting which was a result of a bunch of total strangers trying to take charge and documented it as natural behavior.

Most people who are really into canines completely disavow him now because of some of the misconceptions he fathered, but we have to thank him for the foundations he set for understanding canine behavior. There's a lot of good stuff along with some unreliable stuff to be found in his work "Expression Studies of Wolves" but that's 1) just how science works and 2) a conversation for another day. So what's the real story on wolf packs?

David Mech was the first person to actually go out and watch wolves in the wild and document how a pack functions in a non-artificial environment. Turns out, packs are families.

In Schenkel's pack, the wolves had no time to integrate, had no familiarity, no ties, and were forced to keep a shared space. The strongest wolves were called alphas while the weakest were called betas.

In the wild, the two wolves in charge are actually parents. The rest of the pack is usually all children. Often aunts and uncles will stick around to help hunt and raise young. The behavioral corrections provided by the older adults is often falsely identified as "dominance" when really it's just parenting. What's often interpreted as a "lone wolf" in exile is actually what's called a dispersal wolf: a juvenile or adult who has left to seek out a mate and start their own pack.

Sometimes bachelors of the same sex will group up for a while to hunt, but these bands are uncommon and short-lived and nothing like the hostile group of strangers Schenkel put together. What he created was several pairs of bachelors who all wanted to start their own packs, but were forced to share an enclosure and had to fight for control of space and resources.

This is why I advocate for parenting-style dog training rather than alpha-style.

This is already much longer than I meant it to be and it's getting late, but for further reading I suggest Barry Lopez's "Of Wolves and Men."


The man who never makes a mistake always takes orders from one who does.
— Anonymous