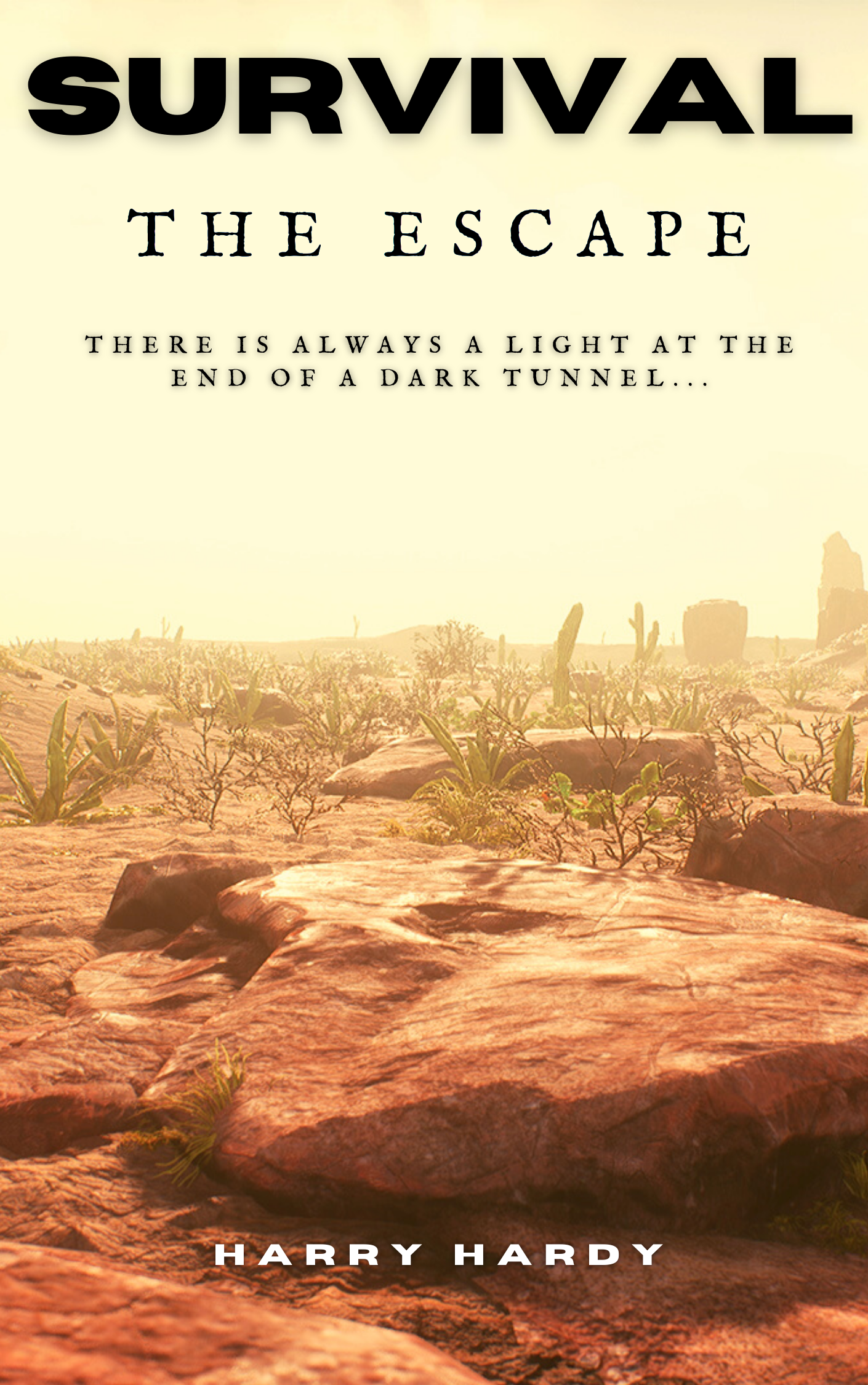 The first book in a trilogy titled Survival.

WW3 started in 2021 and raged on for more than half a century. When the war finally came to a halt in the year 2089, Earth was a mess, most of its powerhouses reduced to mere shells of their former selves. This unfortunately made it the perfect target for the Venocarpathians, an alien race that had set their sights on controlling the Milky Way to use as a launching point for their ships in their century long war with Xartilia in the Andromeda Galaxy.

After having watched Earth for several years, the Venocarpathians attacked in the year 2094, attacking a world that had been severely weakened. Even in its weakened state, Earth united as best it could with its remaining nations and bolstered a defense with a strength that managed to take the aliens by surprise. Earth held its line for a good couple of decades until in the year 2115 things started to go wrong.

In 2115, the 60k atmo(60,000ft above the surface) line was finally breached with Mars, Pluto and Europa all having conceded defeat. The help that Earth had been getting from Renevexia, Zenomia and Amaxonia(From the Lakshian System in Wickramana Galaxy, a neighboring galaxy to the Milky Way) was cut off as the three planets were all occupied by another assault from Venacarpathia's sister planet Venoaltroca. With this Earth's demise was a mere formality or at least so they thought.

Earth, unlike the other planets of the Solar System, didn't concede defeat once the atmosphere was breached and continued the fight on land, leading to massive loss of life and a population that was already battered took a beating. The hastily fixed infrastructure was also lost in large chunks, and a planet that was already turned barren in large areas by a war got even less hospitable.

This would not be able to continue for long however and Earth was officially taken over on the 8th of June 2118. The remaining population numbered in the millions, less than a fraction of a percent of Earth's population from a hundred years ago. They proceeded to round up all the survivors and hold them prisoner in a place known simply as Camp, a massive complex smack in the middle of one of Earth's newest stretches of barren land.

This novel starts off in the year 2217, 99 years after Earth was taken over. Most of the human race has lost hope of ever being free, several escape attempts including the most recent one in 2208 ending as complete failures with all those involved being cut down with no mercy. But as always, there are those that aren't willing to give up. Contributing to this lack of effort is the aliens treatment of the humans. They're provided with things on a fine line that deprives them of most comforts but isn't cruel enough to make them really want to escape.

And one day when something unexpected happens, there is suddenly a light at the end of the dark tunnel they'd been setting in for nearly a century. Can they harness this to their advantage and make their escape?
Last edited by HarryHardy on Mon Oct 12, 2020 4:45 am, edited 2 times in total.
Stay Safe
The Prince of Darkness

I love how much thought you’ve put into this world already! Can’t wait for you to write a 100k novel and jump me in the review leaderboards in November!!

It does not do to dwell on dreams and forget to live.

Ask a Therapist!
I want to read your novel!

Ask me anything. Talk to me about anything. Seriously. My PM box is always open <3

This sounds so interesting! I love how both you and @LZPianoGirl are both doing cool, futuristic sci-fi novels. I'm really curious to see what prompts the humans to finally escape - and how that escape will actually go.

Thanks @Carlito, I've been planning this guy since July when I first heard of NaNo.

And we'll see...my target is 75k for this one...a bit steep but hopefully doable.

And thanks @Magebird. Hmm...fun fact...A Voyage Among the Stars mentions this shall we say...event...that sets off the whole escape in this one.
Stay Safe
The Prince of Darkness

This story takes place around the same time as A Voyage Among the Stars, the cruise ship that gets attacked by pirates in that storybook's prologue has a lot more to do with this story than you might think. So this one's Chapter 3, maybe 4 ish will be happening at the same time as Chapter 1 of that story. The Alpha Pack: Dawn of the Dead and The Sorcerers of Hisderat also take place simultaneously, with this getting underway around the same time as the event of Chapter 30's of The Alpha Pack and around Chapter 5-6 of The Sorcerers of Hisderat.

The whole thing is built in a series of circles.

The entire structure is covered by a giant 30ft high wall made of a metal known as Strototoxium. Its several times stronger than any known metal on Earth and is an alloy of the Renevexian metals, Strotium and Toxium. It has a very round top, designed to prevent any sort of grappling hook contraption and has a laser based defense system that is rigged to vaporize anything that pops up above the top of it [yes this thing kills a lot of bugs]. It has one single gate.

Inside this wall are the residencies for the Venocarpathians. Its your average town, of course the style is a little different from Earths and the technology is fairly advanced but nothing too special here. All the guards and the officers that are there to organize the Venocarpathian military base live here. As of yet they have three large military base scattered across Earth, all of which are fully operational but those are all Venocarpathian settlements. (All the remaining humans live in Camp)

It contains mostly houses, a couple of schools and an prison consisting of isolation rooms to hold humans that cause crimes and regular cells for criminal aliens.

After the settlements is a forest made entirely of Venocarpathian plants, 95% of which are carnivorous and/or toxic. Designed as one more barrier for the humans to have to get through its massive and covers several thousand acres. This strip of forest is nearly impossible to navigate save for a couple of paths left by the Venocarpathians for them to check on the more dangerous plants. Its named the weird forest for its strange assortment of colors and very unusually shaped plants.

Another massive wall, also having the same features as the previous one although this one comes with 8 doors. This is the limit of what a human could ever see. Anyone that peeps even a centimeter above this wall well get lasered in the face.

This is the Center of the Complex, every other part of it is connected to this through eight hallways. This is where the daily schedules for each human is put up and any important announcements for the humans are also left on computer screens mounted here.

This leads towards the human residential areas A through I. Its where the humans live.

Its a meeting place for the residents of each individual sector. One of these exists for each sector and around 10 - 20 passages (depends on the sector) lead off from each Hall to the individual residences for families. So this particular containment center in Area 27 houses around 2600 people, there are around 1000 odd Areas located within Camp.

There are around one of these for every four sectors. Its basically a small scale school where children go to learn the essentials of living in Camp, other important subjects and the history of the human race. A select group that wish to escape also get separate classes on the Venocarpathians and what the humans know about them.

The places where each family lives. Its usually a simple living area sort of bare room, connected to three to five other rooms, one for each family member. Each room has only a bed which is basically a steel frame with no mattress and just the absolute bare minimum of furniture. The one luxury is that each room gets its own attached bathroom.

This leads towards the human residential areas J through Q.

Also contains the same stuff as above.

This leads towards the human residential areas R through Z.

Also contains the same stuff as above.

This leads to gates A to D

The Main Gate. This directly aligns with the gate set in the Outer Wall. Its the largest one and used for bringing in large equipment.

The entrance for alien transports owned by high ranking officers coming to check on the status of Area 27.

The entrance for the lower ranking officers that run the day to day operations of Area 27.

The gate used by the guards.

This leads to gates E to H

The door that humans that are caught in escape attempts are escorted out of for trials that always end in execution. The aliens have yet to let any one that tries to escape live. Other crimes are punished by being put in isolation rooms in the Alien Residential area.

This is the gate for bringing in smaller equipment that need to be transported to the opposite end of camp from where gate A is located.

No one has ever seen this gate in use to determine its official use but it is suspected that this is the gate through which the corpses of humans killed in escape attempts are transported out.

It's a brand new gate, with it officially being unveiled on the day the novel starts so no one really knows its actual purpose.

It leads to the giant incinerator they use as a garbage disposal and the recycling areas for items that can be recycled.

Basically a gigantic furnace that burns pretty much 24/7 and is used to dispose of non recyclable waste.

Where ancient relics from the 21st century that the aliens feel are not usable against them are housed. These items are free to access by humans and they have used these in several very creative ways.

Where all recyclable items are put.

A place considered as garbage by the aliens but this is where most of old human history is stored and the place is used as an impromptu school library for learning about how humans lived before they were held in captivity.

This leads to the area where the plumbing and waste disposal units of the entire facility meet. Its maintained by humans and is one of the few areas of camp that any human can be in at a given time. Most places, only a certain few people are allowed to be there. Checking for violations of this isn't all that strict however because they mostly worry about ensuring the humans don't get out. If they loose their precious resting time by wondering around places they shouldn't be the aliens don't really care about it.

The room where they monitor all the waste disposal systems. Aliens occasionally come to check on these but usually humans have full control.

The room for monitoring the plumbing systems. Again controlled by humans but occasionally checked by the aliens.

The one hallway that is strictly forbidden for humans. It doesn't have any security preventing humans from going in but those that have been brave enough to wonder in have never come back and no one living has any idea of what actually lies inside it.
Stay Safe
The Prince of Darkness


Minds are like parachutes. They only function when they are open.
— Sir James Dewar, Scientist