Knight Clairia strides back into the Great Hall, feeling a bit too proud of herself. Making sure not to trip on her still-shining full suit of armor, she steps forth. "I believe it's finally time I receive my jousting lance!" Arielle, her noble steed, neighs in agreement in the distance (somewhere.)
"If you have
a painting in you, paint.
Just create it.
Banish doubt and fear
and step out of your own way.
Write if you're a writer.
Do what you were born to do.
--Toni Sorenson

Knight Lucy walks back into the Great Hall. Boy, it is hard to remember to review Green Room pieces. "I have come for my sword!'
My Memes and Other Random Stuff Tumblr: https://lzpianogirl.tumblr.com/

A howling of wind tears through the castle and the present knights shiver. It has been a busy few weeks in the Green Room, with the monsters and terrors lurking behind every corner holding good works hostage. But that hadn't stopped the Knights of the Green Room! In fact they had been busier than ever, and especially now that the Day of Reviewing was Returning.

The Commander burst through the doors, with a few spare works clinging at the heels of his horse. He quickly made his way to the front of the hall. "Greetings Knights! I'm sorry there won't be as much pomp and circumstance as usual, since we all are needed back at the battle field. In fact, it looks like my usual members of the Court aren't present! I sent @CaptainJack, Knight @alliyah, Knight @fraey, and Dragon Knight @BluesClues a memo about today, but I wouldn't be surprised if they're already making their way to the Green Room for the preparations for the Day of Reviewing."

Knight Liberty (@Liberty) stepped forward, "Commander, speaking of reviewing, I really need to get back in the battle myself, as I'm being considered for Captain of my Review Team! Could we proceed with the ceremonies?"

The Commander looked around at the knights gathered there, and noticed not one had taken off their gear yet, it seemed they were all itching to get back to reviewing. "Certainly, Knight Liberty - you'll find your new Jousting Lance over by the North East Wall, take care not to scrape the ceiling on your way out! And all the best in your Battles!

The Commander then motioned for Knight Clairia (@Clairia) to step forward. She held up an ink stained log, that had beautiful calligraphy detailing. "If it wouldn't be too much to ask, a Jousting Lance would make a world of difference out in the Green Room Commander."

The Commander took a quick look at the records, and finding everything in order answered, "You'll find your Jousting Lance in the same collection as Knight Liberty's, then you'll be able to get back to reviewing at once! Many thanks for your diligent service!"

Arielle, Knight Clairia's horse let out an excited neigh, and galloped away swiftly.

The Commander was just about packing up his record books, when he noticed a new face in the crowd. LZPianoGirl had not been made a Squire, and yet she had all her records in order for Knighthood, and a Sword!

The Commander ushered her forward. "Well Squire, you've made quick work of the Green Room, and we would be most honored for you to join our order. It is highly irregular that a Knight is accepted before first being recognized as a Squire, but I've heard of your honorable work in the Green Room and we are in need of reviewers with your bravery. Please kneel before the order."

LZPianoGirl kneeled, and the other gathered knights, came closer. The Commander continued, "Squire PianoGirl you have served us diligently even as a new recruit, and from this day forward you will serve as a Knight of the Green Room. Take this new Sword and with it, fight for the good of all works of the Green Room. Bring honor to this order. And review with all bravery. Huzzah!"

Knight Lucy (@LZPianoGirl) stood with a glowing smile, lifted her new sword, and shouted, "TO THE GREEN ROOM!"

All the Knights grabbed weapons and new books of paper and followed after her, back into the fray of the fight.

Knight Lucy stepped into the Great Hall, her shiny sword in her right hand, and a list of reviews in another. "I've come to collect my shield!"
My Memes and Other Random Stuff Tumblr: https://lzpianogirl.tumblr.com/

Court Magician Alliyah marches into the Great Hall, holding a very confused chicken, that bares some resemblance to a Golden Goose, but not as shiny. I have earned no new badges nor treasures at the time of this posting... but I would like to report that someone (Knight Alliyah looked pointedly at @CaptainJack who had a few feathers still clinging to their helmet) has placed a CHICKEN in the midst of my Log!

Clearly, this is a tactic of a fellow knight or enemy to stop me on my mission from finding the Unicorn that yet evades me, but I will not be stopped, in 134 more reviews, I will find that delightful creature!

In the meantime, if anyone would like some scrambled eggs or omelettes, stop by my Village, I plan to be keeping my chicken and opening a breakfast cafe. 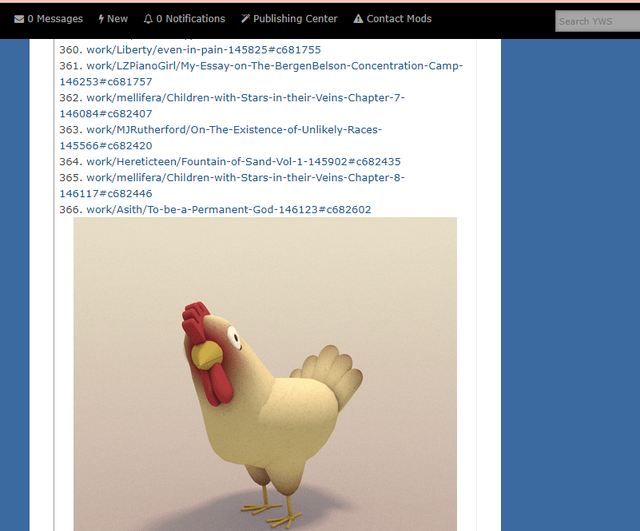 but i still don't think i can ever love someone
who doesn't understand that teal
is a different color than dark cyan.
*napo 2020*
we're all looking for truth

For the first time since the Great Exhumation of 2017, Knight Nite entered the Great Hall. She'd hoped to have found the Unicorn by now, but duties outside the kingdom had pulled her away. Still, she'd been battling when possible, and she'd seen telltale hair and hoof prints. She was closer than ever.

But today, she is here to gain a different accolade, one she thought she would never earn, not being a great slayer of Chapter-Beasts. But she had gotten carried away with Knight @CaptainJack's delightful mystery tale and battled enough to earn a Village!

Knight Nite, The Knight of Night
"You do ill if you praise, but worse if you censure, what you do not understand." Leonardo Da Vinci

Knight Lucy walked into the Great Hall, "I have also come for my helmet!"
My Memes and Other Random Stuff Tumblr: https://lzpianogirl.tumblr.com/

How would I go about claiming a village?
What's the point of success if it makes me miserable?

Knight Jster entered the great hall, and tossed his bag full of the spoils from his latest green room conquest onto the table.

"I hope this is enough to buy me a horse, because all this walking has really been making my legs hurt."
What's the point of success if it makes me miserable?

Dossereana came running into the Great Hall with her with her horse awaiting her come back out side, She held up her scroll of reviews,
"I have come to claim my full Armor," Dossereana waited for the out come patently

also the log mite have been wrong but I remembered and went and fixed it so if you have seen it already can you go and look at it again pleas.
Last edited by Dossereana on Tue Mar 03, 2020 1:03 am, edited 2 times in total.

Dossereana still at her wait then held up another scroll.
"I have now come to claim my Jousting Lance," Doss stood at ease, hoping that everything was in order.

Captain Jack yawned and stretched as they made their way to their seat in the Great Hall. They picked up a mug of tea from a passing Squire's serving tray. To another they said, "Squire, please call in the awaiting knights."
"Would you like the badge vouchers as well, my lord?"
The knight leaned back while sipping their tea, simply nodding to the waiting squire. The squire handed them a printout with all of the awards on the docket and the knight quickly went through them.

"Step up Knight Lucy (@LZPianoGirl) to receive your Shield and your Helmet."
"To Knight Nite (@niteowl), for your courageous rescuing of a Village, it now becomes your land. Because we live in a feudal Monty Python world. I did notice that you already have one Village and have delivered 10 consecutive reviews so you are eligible for a Hamlet if you would wish to have one.When you have decided on a new name for your village and hamlet simply seek out the Court Magician."

The squire stepped up onto the platform while the knight was delivering their speech, whispering in Jack's ear and slipping them a sticky note.

"It seems that we now have a question about Villages. Once you have completed your five consecutive chapter reviews Knight Jster (@jster02), you would simply come here to report it and then contact the Court Magician about the name of your village. And your horse will be waiting in the stables for you."

While waiting for Knight Dossereana to step forward, the Captain began filling out of all the bureaucratic forms. They heard the soft clinking of miscellaneous pieces of armor.

"It seems that your are in need of a Full Suit of Armor and a Jousting Lance. Make sure to keep your new suit oiled so there's not so much clinking and squeaking."
Cavalry Captain Jack
The Exploits of Lord Wolf
LMS V: How Do You Plead?
Get Your Reviews At Jack's Roadhouse
Jack: Live From Pensacola
Read All About It At The Lizard Lounge

@CaptainJack, thank you for pointing out the error in my deeds. I have indeed been aiming for a Hamlet since I already had the Village. My Village's name is Ursa Minor and my Hamlet is Ursa Major.
"You do ill if you praise, but worse if you censure, what you do not understand." Leonardo Da Vinci

I wish to become a knight.
Dumbledore: "Now, it's great that you've been saving the school and all Harry, but unfortunately your grades have been a tad low, and, well... perhaps Gandalf could explain it better... hit it, Gandalf!

Gandalf: "YOU SHALL NOT PASS!"

Squire EverLight steps into the hall.
''I wish to become a Knight.'' she announces.
Proud Slytherin, Proud RavenClaw


The emperor is rich, but he can't buy another day.
— Chinese Proverb