January had a Review Day that was ripe for the record books! The mod staff decided to take an extra spin on the classic review day and make it an Among Us themed day. We've had themed review days in the past (like the Harry Potter one, the Pokémon-Go one, and a few others) but this one was neat in that we had a lot of lead-up for anticipating the review day because we announced the theme a couple weeks prior to it happening.

Especially exciting about this review day, is that users were encouraged to change their avatars to be Among Us themed. @SpiritedWolfe, @Liminality and @Magebird even opened up a thread to facilitate and it was awesome seeing so many people get involved! As a side note, Dark Cyan seemed to be a particularly popular choice among the avatars.

I tried to collect all the Among Us avvies I saw being used around the site and arranged them below: 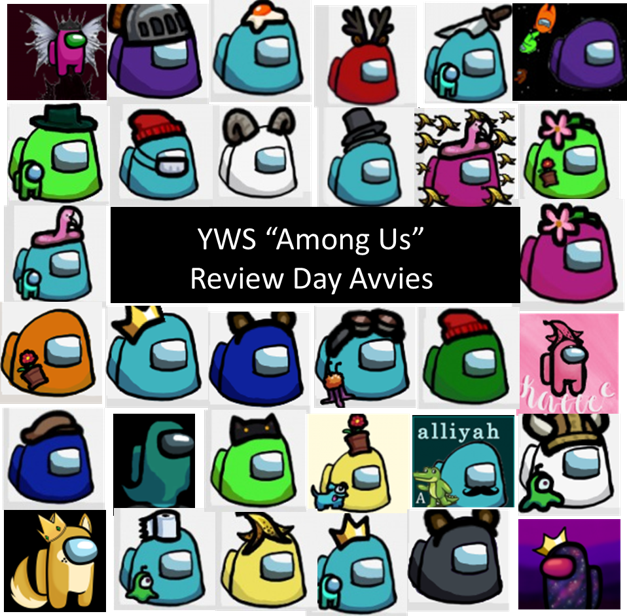 For the actual review day, reviewers were separated into two teams. On one side you had the impostors and on the other the crewmates. We had some all-star reviewers leading up the teams, with @Yoshikrab leading Impostors and @SilverNight leading up crewmates! Members really showed up for the festivities and 48 reviewers participated writing 222 reviews total! Reviewers were able to clear the Green Room which was rebranded as the Lime Room for the day and was quite a feat in itself. Interesting both teams ended up in an epic tie by the time the dust cleared with 107 reviews each. The Impostors team was ultimately declared the winner gaining about 1000 points more than Crewmates. Overall January was our second best review month in the last 12 months (the top one being RevMo in September) so it was a pretty impressive month, we even had 6 people win Team Tortoise (congrats @HarryHardy, SilverNight, @Plume, @starlitmind, SpiritedWolfe, and @whatchamacallit !)

Apart from the amazing review day, other contributing factors may have been the January Reviewing Challenge, SpiritedWolfe's awesome Review Task list, 21in21 and also people trying to set-off their New Year Review-Resolutions on a good note! If January is any indication for the rest of the year though, 2021 might be a very strong reviewing year!

Congratulations to everyone who contributed to the Review Day or just hung out in the Among Us mayhem! I hope you join us for our next Review Day! If you want to read more about this Review Day's Statistics you can check them out here .

For this week, as I'm making my active return to Squills, I've decided to write about one of my favorite albums of all time. I believe I've written about and mentioned some of the tracks in a previous article, but I've never approached the entire album as a cohesive piece. Centerfield is an album that screams Americana and perhaps that's something we should be thinking about with the current state of American politics.

Perhaps the most political song on this album is the fourth track of Side One which is titled "I Saw It On T.V.". In this song, the narrator explains everything that he saw on TV over the years, starting with the cartoons in his childhood and then witnessing all of the news reports of the Vietnam War and Cold War Era. Fogerty's references to tragic events such as the assassination of President John F. Kennedy are less than subtle. While Billy Joel's "We Didn't Start the Fire" has a much catchier pattern of remembrance, this song has all of the same fury over American history and politics.

There were several big hits to come off of this record including the first track, "The Old Man Down The Road", which is regarded as quintessential Fogerty style swamp rock. Music that is described as "swamp music" usually originates within Louisiana or Texas with the unique mixture of influences that come from the region. As compared to the music of the Mississippi Delta, swamp pop/rock does not get quite as much attention during the current revival interest. As the joint effort of rockabilly and New Orleans R&B this is certainly a genre that deserves more listeners.

Another point of interest in this album also comes from Side One with track three - a cover of "Big Train (From Memphis)". This bluegrass styled song was made most popular by members of the Class of 55 (stay tuned for an article on this) after Fogerty wrote it for this album. I think every great country musician has to write a train song at some point in their career and this is his train song. It hasn't yet fallen into the standard lineup of country songs that are covered by modern popular artists, but it also shouldn't be skimmed over.
To learn more about the Class of '55 version of this song, I would strongly recommend watching this short documentary clip introduced by Dick Clark. Spend 6 minutes of your time learning about the history of country music .

The last song on this album worthy of its own paragraph is track 2 from Side Two and it is in fact the title track "Centerfield". In addition to the general track below, you can click here to access the music video. It is a slightly unorthodox music video that is just a collection of baseball cards and footage from games with the track overlaid on it, as if Fogerty is narrating their actions. Definitely a very enjoyable way to consume the song while witnessing another remembrance of history that occurred with this album.

Enjoy this issue's recommendation and I'll be back again soon with another album worthy of your time.

WORD OF THE WEEK: RIPOSTE

Definition: n. a quick, clever reply to an insult or criticism.

v. make a quick, clever reply to an insult or criticism.

Used in a Sentence: The boy was jealous at the girl’s skill with magic spells. His jealousy manifested itself into name-calling. But whenever he called the girl a name, she just and gave a witty riposte.

This is a bit belated, but a while ago, on the 17th of January, our very own @SpunkyKitty was Featured Member! It had only been four months of her activity on YWS, and she had already made a corner for herself on the site by reviewing excessively and being a whole lot of help for the Knights of the Green Room . She was even super active in the Randomosity section of the site!

Sq: Heya! I'm a reporter for Squills and I was wondering if you were cool with me interviewing you about your experience as FM?
Sp: I'd be down with that!

Sq: Awesome! Firstly, what was your first reaction when you found out you were the newest FM of YWS?
Sp: I danced around the room for a couple minutes to be honest XD. I completely made my day.

Sq: Aw, that's wonderful! How do you think the High Court™ chooses the featured members?
Sp: Hmm, this is a mystery I have often pondered. Probably they choose based off of overall usage of uppercase letters and exclamations.

Sq: Ahaha, nice! Do you think that's what you did to get the FM title? - uppercase letters and exclamations?
Sp: Oh yes, one hundred percent. I mean, it might have helped that I'm a pretty active user.

Sq: Yeah, I think that could be a reason! Is there a specific part of the site that you enjoy being around?
Sp: WFPs. I absolutely love procrastinating on those with other awesome writers.

Sq: Ahaha sounds fun! xD Alrighty, is there anything else you'd like to say or any shout-outs, etc?
Sp: I'd like to give a shout-out to @starlitmind. Star is so sweet and awesome and makes me really happy. (also thanks for being the first person to welcome me here!

@LadyMysterio also. Thanks for being there for me <3

And a very big shout-out to all my very favorite Spunky-wall-spammers! @ChesTacos @hannah0528 and @rida

Sq: Fantastic! Thanks for taking time out to do this interview! <3
Sp: Of course Lib! <3

Here’s the announcement thread if you’d like to check it out! <3

Is your most favorite pen in the world not letting ink out? Do some of your precious markers seem to have dried out? No worries! The YWS Pen-fixer can help!

PM @LordMomo with any questions.

The Poetry Readers
is new and improved!
Want to read lots of poetry?
Well then this is your groove!

That's right! A re-vamped Poetry Readers club is coming to YWSes near you this February! We'll still be discussing poems like before, but with a couple of *snazzy* twists. Instead of holding discussions in the club forum, we'll be meeting in a WriterFeedPad at the end of every month to discuss the poem together - in real time! And we won't just be discussing the poems of "famous" poets, we'll be discussing YWSer poems too. If that sounds like fun to you (trust me, it is!!), then subscribe to our club, and stay tuned for more information!


The only way of knowing a person is to love them without hope.
— Walter Benjamin