This is a fanart drawing of my favourite manga character from Battle Royale
You're not scary, you're nice

Teehee, it's so cute! This is really nice, just one question. When you say Battle Roayle, you mean the book that the Hunger Games ripped off?

Anyways, I figure I should offer you some constructive criticism, you know, to help you lol. My main problems were with the guy she is squeezing. His cloths and body look really good, but just one small thing. His hand isn't attached to his arm. Also, if that were me, I'd be squeeming around and trying to get out, and he's just stiff like a plank. And the stuff you did with the face, with the nose and mouth, it doesn't really make him look like a person. However, if that was what you were going for, just ignore me

This is so cute, but also so creepy! I love it! The face is really great, you really captured the manga look, with small stuff like the lines on her cheeks and the way you did the mouth, and stuff like that. I really liked the expression, from stuff like the eyes, and the way she's smiling, you really get the feeling that she's quite overly attached. Really good job, I'll try to get around to more of your work, if you have any more. If you want anything specific done, just send me the link in a PM, and I'll do it for you.

"During high school, I played junior hockey and still hold two league records: most time spent in the penalty box; and I was the only guy to ever take off his skate and try to stab somebody."
-Happy Gilmore

I've never really sat down to watch Battle Royale, though I've seen some of the more surprising clips of it, and again, I wouldn't know the differences between the film and the manga. It's kind of funny though, because if you hadn't included who the character is, I wouldn't have ever assumed someone so cute and joyful would be in something so bloody and ruthless as Battle Royale xD but I s'pose that's the point of it. I like how you manage to capture that childlike innocence and stuff in the drawing :3

The little doll is adorable by the way :3 I know it's supposed to be a neutral expression, but I keep imagining the doll like "ugggh don't squeeze me plz'" Haha. As far as constructive criticism, I do think the shoulder there is a bit too pointy/sticks too far up.

Also, what did you use to draw? It looks like marker/sharpie. And as much as I hate drawing on those things, part of the problem I find with them is that it's hard to vary your line-widths. They give you a lot of static looking lines - like the width of your lines all look the same thickness, so it makes the image kind of flat. Compare to this: 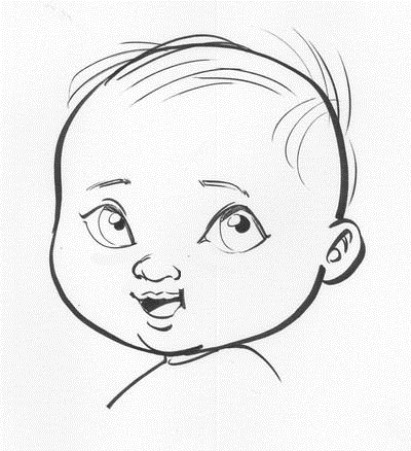 See how the lines differ in width? Like the head is super thick lines, but areas of the head, such as the curve right by the eyes, the line is thinning and then thickening - so it has a smoothness. Also, the lines on the inside of the face and the hair are WAY thinner. So it creates a softness and dimension even without the shading.

Even though your lines on the inside of the face is thinner than the outside - there's not much variety elsewhere to really be able to tell/stick out. It looks like you were trying to thicken the lines, so you did two or three strokes, instead of one continuous stroke, but then that looks just a tad bit choppy/not as smooth. You can vary the length of your lines by adding pressure/decreasing pressure an then just practicing strokes. So, that's the big thing I'd suggest, maybe smoothen your lines c: But that's just really, really technical. Haha! Keep drawing!

~ as always, Audy
'Tis the season! Donate your poetry.


We know what a person thinks not when he tells us what he thinks, but by his actions.
— Isaac Bashevis Singer